Parkinson Canada SuperWalk, now in its 3rd year in Lanark North Leeds, takes place on Saturday, September 7, 2019 at Conlon Farm, 109 Smith Drive in Perth with check-in at 9:30 pm. The walk is one of 80 taking place across Canada and has been Parkinson Canada’s major fundraising event for more than 30 years.

Parkinson’s, a progressive neurological disease, can affect people of all ages but is most commonly diagnosed around the age of 60. Tremor is the most well-known symptom, but the significance of non-motor symptoms such as sleep disturbances, depression, apathy and vision problems are now more widely understood.

The success of the Lanark North Leeds SuperWalk may be due, in part, to a world-wide phenomenon – the number of people being diagnosed has been increasing at an unprecedented rate. With more than 25 people in Canada diagnosed each day, that rate is expected to double by 2031. Age is one factor in being diagnosed. Lanark Leeds and Grenville, home to the largest percentage of seniors in Ontario, will be no exception. It is also a rural community with the environmental risks sometimes associated with developing Parkinson’s; use of chemicals and pesticides for farming and well water. This increase will place additional demands on already scarce medical and other services.

“The severe shortage of general practitioners in the area is a problem,” says Pat Evans who, along with Gayle Truman, spearheaded the first local walk in 2017. “And the lack of neurologists with extra training in movement disorders like Parkinson’s, affects quality of life. Some people do not have even a general neurologist or need to drive long distances. Others wait months just to get an initial diagnosis.”

Parkinson’s disease is also very complex, with many different presentations, and each person’s experience is different. It requires not only a well-informed family physician, but also a specialist who can adjust the often-complicated medication routines as well as provide individualized care. Specialists may will refer the person to other health professionals such as physiotherapists, speech & language pathologists and social workers as required.

Erin Myers’ father, who was diagnosed with Parkinson’s at 41 years of age, lived until he was 71. “I know that a knowledgeable family physician, a movement disorders specialist, support services and a compassionate community are all important for the person with Parkinson’s and their family,” Erin says. “SuperWalk gives us the opportunity to raise both funds and awareness and experience a sense of solidarity and hope for the future.” 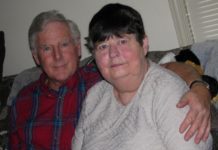