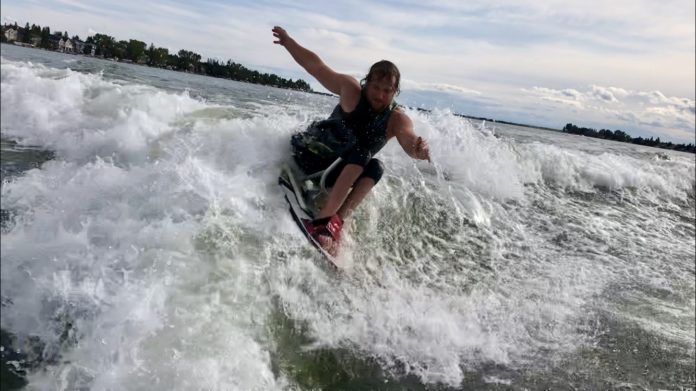 Brian Rowland of Merrickville recently won a first at the NAUTIQUE CANADIAN WAKESURF NATIONAL CHAMPIONSHIPS 2019 on Lake Chestermere, Alberta, becoming the first adaptive champion ever in the sport.

Brian, born and raised in Merrickville, is proud to call this place home. In the spring of 2015, he broke his back in a motocross accident; as a result, he is paralysed from the waist down and now uses a wheelchair to get around. During his rehabilitation, he got involved in many different sports. He learned to wakesurf and water ski on the Rideau River with the folks at SkiAbility Ottawa. Now, when he is living in Merrickville, he is often out there doing just that. This summer he was invited to the Canadian Wakesurf National Championships and came away with a gold medal.

After his accident, Brian also joined the adaptive ski program at Calabogie, learning to sit-ski. He started competing for Team Ontario in the winter of 2018 and recently joined the national “Next Gen” as a member of the Canadian ParaAlpine Team. He has been going back and forth from Ontario to Alberta and British Columbia, training hard for his alpine skiing in the mountains while spending the summer months back home. He is currently training out west, preparing himself for the upcoming alpine ski season and is planning to compete in the next Winter Paralympic Games in Beijing, China (2022).