The RVBB was established in 1980 at the home of Marg Carson, near Burritts Rapids. The name Boots and Baskets was chosen based on the button-hooked Victorian boots that were popular up until the 1950s, and the apple baskets used for carrying rug hooking supplies. As the group grew, Rideau Valley was added to the name and gatherings moved from people’s homes to Burritts Rapids Community Hall, where they started meeting on the first and third Thursday of each month from September to June. 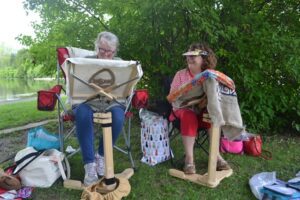 As part of the Ontario Hooking Craft Guild (OHCG), members have hosted Area 1 picnics and also put together rug hooking demonstrations at the annual opening of the Merrickville Blockhouse Museum, as well as other local fairs. They have created group rugs, including a Millenium rug and a rug celebrating the 175th anniversary of the Rideau Canal. Many of their members have also displayed their rugs at the OHCG annual conferences, and all their members contribute to annual RVBB auctions, with proceeds going to support local flood victims, CHEO, Camp IAWAH, the Burritts Rapids Community Hall, and the Hooked Rug Museum of North America located in Hubbards, Nova Scotia.

The group now has over 40 members from all over Eastern Ontario including Perth, Merrickville, Portland, Smiths Falls, Kemptville, and Ottawa. Members range in ages from 30 to 92, which creates a great opportunity for inter-generational connection. One of the original members, Marjorie Holmes, 92, from Perth, was at the meeting last Thursday working on her 25th hooking project. “I really enjoy it,” she says, “It keeps me busy and I love doing it.”

Another RVBB member, Andrea, said that taking up hooking has helped her immensely in her recovery from anxiety and PTSD. She says that in many ways the connections, friendships and passion she has for rug hooking helped save her life. “It helped give me a purpose and stay grounded,” she says. “It’s the ability to create with other women, and be inspired by other women and men,” she said. “Everybody is so open to sharing and learning.”

A newer member, Nancy, said she was extremely impressed from the start about the quality of the work of the women in the group. She thinks it is a great place to learn about hooking because everyone is so willing to share their knowledge. “You feel a part of it really quickly,” she said.

The members of the RVBB are passionate about hooking, and the pieces that they shared at the meeting last week were true works of art. There is also a clear camaraderie between members which is contagious. It made me want to take up rug hooking myself.

The RVBB is always happy to welcome new members. Due to COVID-19, they are meeting at the Burritts Rapids locks while the weather is still nice, and they hope to move into the Burritts Rapids Community Hall once again in the Fall. A dedicated team within the group has also created a Hook Book to celebrate their 40th anniversary with stories from members as well as hooking patterns and tips and tricks.

For more information about the Hook Book, or the Rug Hooking Group in general, email [email protected].