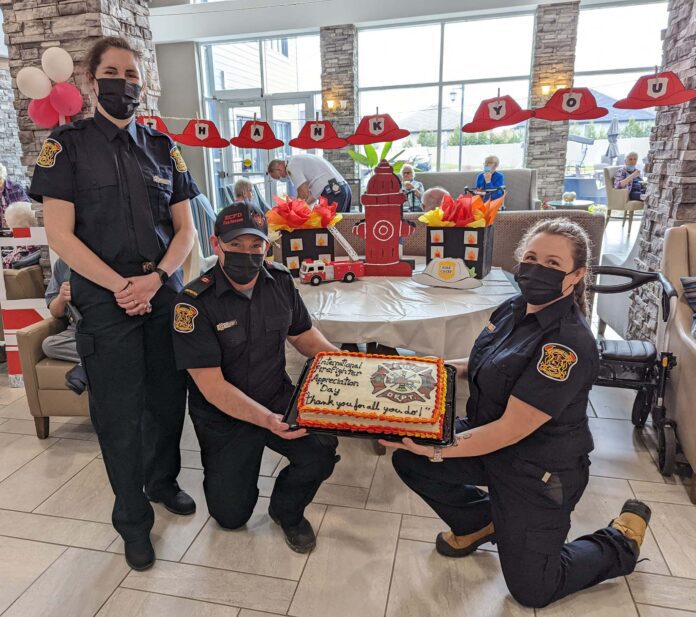 On Wednesday, May 4, people around the world celebrated International Firefighter Appreciation Day. An event hosted by Kemptville Retirement Living helped to make sure that firefighters from local departments received their share of the gratitude. In attendance were Chief Okum of the North Grenville Fire Department, Chief Moore from the Edwardsburgh Cardinal Fire Department, and Chief Cole from the Merrickville-Wolford Fire Department.

Residents of the retirement community dedicated all of their art time to making art for the firefighters during the week leading up to the appreciation event. The art expressed gratitude for the first responders’ service. The residents also had a fun-filled day, as many relieved childhood fantasies by trying on firefighter gear, climbing into the cab of a firetruck to pull the horn, and socializing with the firefighters both inside and outside. For many residents, this occasion marked the first time since the onset of the pandemic that they have been able to have this type of social interaction. To mark the occasion, two cakes were donated by local dentist Dr. Sohal.

The Recreation Coordinator for Kemptville Retirement Living told the Times that the firefighters who came to the event enjoyed themselves just as much as the residents, since it provided the opportunity for them to have a “different type of connection” with members of the community. There was even a personal connection made in some cases, as some of the residents had parents who were firefighters. “It was a wonderful day,” the Recreation Coordinator said.

The selfless work of first responders has been a focus lately, with not only International Firefighter Appreciation Day, but also the province-wide First Responder’s Day celebrated locally on May 1. First responders include police officers, firefighters, and paramedics, who all respond to potentially traumatic and disturbing emergency situations on a regular basis. First responders experience a statistically much higher rate of mental illness than the general public, which is tied to the stress and trauma of their work. As an example, one study estimates that approximately one third of all firefighters are experiencing some form of mental illness at any given time, which is about three times the rate of mental illness in the general population.

A problem in the first responder field is that the stigma of mental illness can often keep these professionals from speaking up when they are struggling. There are now many online resources dedicated to eliminating the stigma and encouraging first responders to seek help when needed, though of course there is more progress to be made. Awareness, understanding, support, and of course, appreciation are a great place to start.