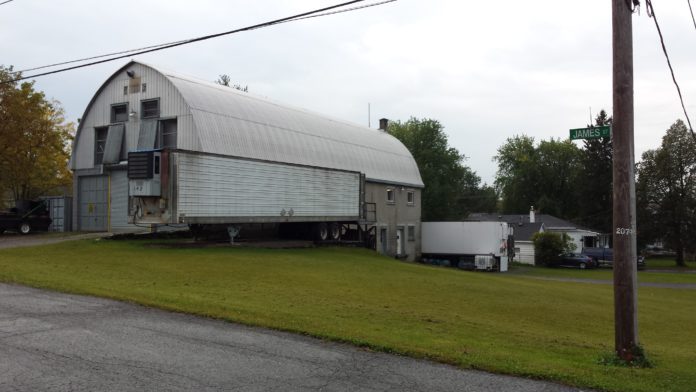 Since it was built in 1952, there’s always been a bee keeping business in the building at the corner of Oxford Street and James Street in Kemptville. Over time, the area around it grew with houses popping up where there was once only farmland. Needless to say, the look of the neighbourhood would be radically different now from the one that the original builder would have seen 65 years ago.

The local operation has grown significantly over the past 24 years, to become the largest honey producer in Eastern Ontario, with over 1,200 hives scattered around the South Ottawa, North Grenville, and Dundas County region. Known for its quality, Vichos’ honey has been enjoyed around the world in countries like Germany, the UK, South Korea, and all over North America. The company plans to re-launch their own line of local retail honey products soon after dealing with a trademark issue that had forced them to consider a name change.

Recently, the business made the decision to remove 120 large 55-gallon barrels that are currently stored outside the building, due to a complaint from the public. When an attempt was made to get a permit to expand the building in order to store the barrels inside, it was denied by the municipality. This forced the business to rent additional property to store the barrels. Extra insulation and special light shades were purchased and installed to resolve both a noise and a light complaint brought to their attention by the municipality. An employee of the Municipal Planning Department set up a site visit to assess the property and operation.

Peter was advised that the municipality would need to consult with residents living in the area before proceeding. After a follow-up meeting at the North Grenville Municipal Centre, it was stated that the permit would not happen this year. This was a blow to the business, which felt it couldn’t wait another year, plus any additional time that would be part of the building process. So, the decision was made to begin the honey extraction at the building, as it had been done for the previous 64 years.

Peter Vichos was advised by the Planning Department that he would need to submit a site plan drawing. He agreed, and was told that it didn’t need to be drawn by an architect, but would need to be detailed, and that the Planning Department would wait for it to be sent in. On September 11, however, a registered letter was received which was an ‘Order to Comply’, and stated that the four trailers outside the building (that the business has used for storage for the past 25 years) had to be removed by September 30. Working sixteen-hour days, and needing the trailers to remain exactly where they were to avoid disrupting the extraction process, Peter was unable to comply. On October 10, bylaw services appeared to deliver a summons to appear in court on November 16.

Peter hoped that the two parties could come to a compromise, and he was waiting to hear back from the municipality about another meeting to discuss the situation before the court date. It’s frustrating that this local agri-food business has had such a difficult time, when they were just trying to be a good corporate citizen by resolving a complaint they received. Unfortunately, nothing ever seems to be simple for small business owners. It would be shameful to see a local agri-food business forced to leave or, worse, shut down, when we claim that we want more of them to move here. This affects, not only Peter himself, but also the three seasonal employees he hires from March to November. Surely this red tape can be untangled?