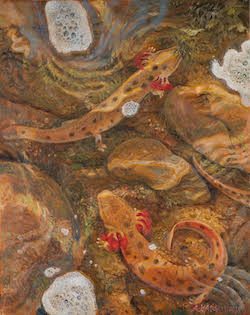 A painting of Oxford Mill’s famous mudpuppies has been published in Ontario Nature Magazine. Artist Aleta Karstad is no stranger to these large, spotted salamanders. She and her husband, biologist Dr. Fred Schueler, have been taking people to visit them at the bridge in Oxford Mills every Friday night from the first Friday after Thanksgiving until spring high water for 15 years. It is the best place to see these magnificent creatures in Ontario because of its shallow water and flat, stoneless bottom. They even take a bucket of them in to the Brigadoon for the guests to see on their way out after dinner. “I’ve seen a fellow in a tuxedo on his hands and knees with both hands in the water to touch them,” Aleta says.

Ontario Nature first contacted Fred about an article on mudpuppies because he is the leading researcher of mudpuppies in Ontario. One of the staff at Ontario Nature’s office in Toronto knew about Aleta’s paintings and suggested they ask her if she had any illustrations of the mudpuppies to accompany the article.

“I had always wanted to do an oil painting of the mudpuppies,” Aleta says. “I decided to take the opportunity and submit it on the chance that it would be accepted.”

Aleta painted from a few photographs she had taken, as well as from memory. She says she loved depicting the network of wavy bright lines that forms when you look through the water. “I think it’s quite beautiful,” she says.

The painting now accompanies the article on mudpuppies in the current issue of the Ontario Nature Magazine. It is also the second slide of photographs on the magazine’s website. Aleta says she feels honoured to have her painting in Ontario Nature, accompanying what she thinks is a great article on the animals she has grown to love.

The original 16×20 painting is available by email auction to support their mudpuppy research. The starting bid is $650. Prints are also available and can be purchased for $125. To buy the painting or prints contact her at karstad@pinicola.ca. You can also see some of her other biodiversity paintings on her website www.aletakarstad.com. To learn more about mudpuppy night in Oxford Mills, email Aleta and Fred at bckcdb@istar.ca or call them at 613-258-3107.