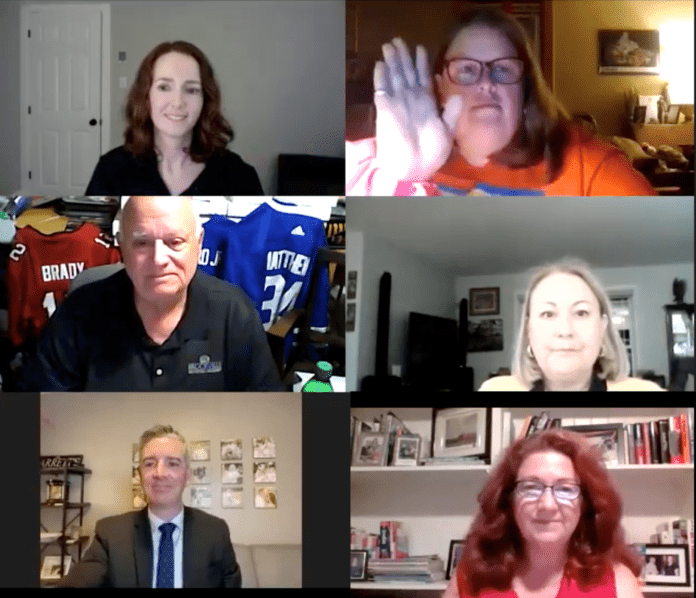 Bruce Wylie asked candidates: “Will you commit to require all sectors to reduce carbon emissions by 60 percent by the year 2030 and make it law?”

Michael Barrett of the Conservative Party was first to answer. He stressed that “Canada’s conservatives will meet our Paris climate commitment and reduce emissions by 2030.” Michael cited carbon capture and the importance of job creation in that process.

Lorraine Rekmans for the Green Party answered “Yes,” and added that since we have been issued a “Red Alert” on the environment from the UN, the Green Party is proposing to act much more quickly than 2030.

Michelle Taylor for the New Democratic Party also answered “Yes” and said “I think the NDP has the priority to actually get things done. To take these targets and to meet them, as opposed to the liberals and conservatives who have not yet met a single target that they have put forward.” Roberta Abbott for the Liberal Party cited the “Net Zero Accountability Act passed in Parliament this spring,” which “sets the goal of achieving greenhouse gas emissions reductions of 40 to 45 percent below 2005 levels by 2030 and net zero by 2050.”

“Will you commit to a green and just pandemic recovery? What would you do to address how women and other marginalized groups have been disproportionately affected by both the pandemic and our environmental crisis?” was the next question posed to our candidates.

Michelle Taylor explained how so far, pandemic relief efforts have allowed people to fall “through the cracks.” As a party, she explained that the NDP promotes Universal Basic Income, and is working to expand Health Care to include dental and pharmacare. She said this is “huge as an anti‑poverty initiative.”

Roberta Abbott stated that she is “very proud of our government’s record on how we handled our response to this pandemic” and that Canadians were able to maintain “a reasonable quality of life under the circumstances.” She also explained that each section of the Liberal platform has a “gender and diversity impact summary,” allowing for “holistic responses to these issues.”

Lorraine Rekmans said “the pandemic has shone a light on the shortcomings of our society.” She said “the discussion that’s happening about recovery is happening in the context of a time that doesn’t exist anymore. We are caught in a pandemic. We are in a climate crisis.” Concrete steps she hopes to take are for a guaranteed livable income, addressing the housing crisis, and supporting food security.

Michael Barrett explained that with the pandemic, “Canada’s unemployment rate has been among the highest in the G7,” with “folks who traditionally faced barriers in entering the workforce, like young people, like women, and racialized people” facing the most problems. He said the conservatives will double the Canada Worker’s Benefit and further support Disability Supplements and Care‑giving Supplements.

The last question we will summarize today was “Indigenous people play a critical role in environmental solutions. Will you implement the United Nations Declaration on the Rights of Indigenous Peoples, and calls to action in the Truth and Reconciliation Commission? Will you invest in indigenous led land use planning and the establishment of Indigenous protected and conserved areas?”

Michael Barrett discussed the issue of clean drinking water on reserves, stating “We’re committed to providing First Nations with clean drinking water.” He went on to state that the Conservatives will honour the article of UNDRIP that “affirmed the right of indigenous communities to pursue and benefit from economic opportunities that develop resources on their territory.” He also said his party will expand indigenous protected and conserved areas because “Indigenous people want a say in what happens on their traditional territories. They want to be partners in the responsible development of those lands.”

Lorraine Rekmans stated “I know you want to talk about land use planning, but the basics are making sure that communities are in an equitable or just place in order to participate from a position of free, prior and informed consent.” In order to establish these conditions, Lorraine explained that the Green Party is developing policy toward amending the Constitution of Canada so that UNDRIP can actually be implemented in its entirety.

Michelle Taylor said “Absolutely, the NDP is committed to implementing UNDRIP and all the calls to action that are contained in the Truth and Reconciliation Commission.” She went on, “the duty to consult that is in the constitution right now, is completely inappropriate and inadequate.” Michelle also said that “we need to be respecting treaties, which right now are just being regarded by the government as second class legal agreements.”

Roberta Abbott cited Liberal MPs voting unanimously in support of passing UNDRIP, stating that the Party is “working with Indigenous leadership and communities to develop an action plan to implement the declaration.” She says over 80% of the calls to Truth and Reconciliation have been implemented and she believes that “We need to be equal partners, nation to nation, with indigenous peoples to not repeat the errors of the past.”

You can access a recording of the debate, and see candidates respond in full to all questions, at the Facebook Page for 100 Debates on the Environment LGTIRL, https://www.facebook.com/LGTIRL.Debate/.