September 9, also known as Red Shoe Day, is an important date for local resident Tracy Crawford. She is devoted to raising awareness of Fetal Alcohol Spectrum Disorder, also known as FASD. The theme for this year’s FASD awareness day is Building Strengths and Abilities. This is a cause close to her heart, and she shares a story to shed light on how it affects not only the child with FASD, but the home and the community.

“I am an adoptive mother of two kids, and let me brag a little here – they are the best kids ever, and every bit MINE. Some people are under the impression that adoption is like Amazon – you put in your order for a baby, girl, caramel skin toned with hazel eyes, and they find the appropriate kid and show up at your door. Nothing could be further from the truth. Prospective adoptive parents are thoroughly screened, interviewed as part of a Home Study, and take a preparatory course named PRIDE (Parent Resources for Information, Development and Education).

Once all of this is complete, the parents are deemed to be adopt ready and the matching process begins. Part of the Home Study is to answer questions on how comfortable you are with the various special needs a child may have, or may develop, to ensure that kids with special needs aren’t matched to parents who are not prepared to handle those particular needs.

Among those needs is FASD. As is the case with many special needs, FASD is on a spectrum; children with FASD can present with disorders as mild as a learning disability, or with profound deficits and mood and behavioural disruptions. It can be a very heartbreaking diagnosis and takes a lot of special care, patience, support, and an abundance of love to parent a child with this diagnosis. A proper match is key. Often, when people hear you have adopted, they are very curious as to the history of the children and the usual response to these types of inquiries is, ‘It’s not my story to tell’, which is to protect the privacy of our children.

My adopted uncle wasn’t so lucky. Now I want to preface this part of the story by saying that  in 1958, there was no diagnosis of FASD to be made – very likely, the connection to alcohol and fetus development had not yet been made. Adoptions were much more like ordering from a catalogue, there wasn’t very much in the way of a Home Study (if any at all), and there was no PRIDE course. In short, things were DIFFERENT. When you know better, you do better.

To protect the privacy of my family and my uncle, I will call him Andy, and he has passed away. Andy was adopted as an infant. He came into a family that loved him, was financially stable, but maybe not well equipped to deal with the challenges that Andy would bring. Andy’s parents had high standards for all their children, and that included Andy. He struggled in school and had behavioural problems that would present as disobedience. As he grew up, Andy’s behaviours became more troubling; he would lie, steal, and break the law, and eventually he turned to drugs. For as long as they were able, his parents redressed his mistakes and gave him multiple chances to change the path he was on, but it was to no avail. Eventually, much to their own heartbreak, they made the horrible decision to ask Andy to leave the family home as an adult – he was too disruptive and they needed to safeguard their other children. Andy would be in and out of jail, halfway houses, and rehab, none of which helped because none of these would address the underlying condition of FASD.

Andy would reach out from time to time, he was still a loving man, but it was hard to understand him – whether due to FASD, or due to the drugs he was on. He wanted a different life, but was helpless to obtain it. His family loved him, but were also powerless to provide the help he needed. His life story was one of tragedy.

Under today’s adoptive processes, Andy would never have been placed with that particular family. They try to keep children within the same heritage and cultural background when possible, but his prospective parents would also have been screened and would not have been identified as people who could properly address the condition of FASD. His eventual forever home would have been provided with all the proper resources, including financial help to pay for those resources, if needed. Andy would still have had major obstacles to overcome, and he’d likely need lifelong support; but his story would have had a much happier ending. Andy – I’m sorry, I love you, I wish things had been different.”

It wasn’t until 2020 that the Government of Canada officially recognized September as FASD Awareness Month. This was started with three parent advocates from Canada and the United States. They wanted to bring attention to FASD and the impact of alcohol consumption during pregnancy. The significance of September 9 was to recognize the 9th day of the 9th month of going alcohol free for the full 9 months of pregnancy. The very first day was celebrated on 9/9/99. The Red Shoe idea started in 2013, when Canadian educator and advocate, R. J. Formanek, wore red shoes on an international stage to talk about FASD. For him, wearing red shoes is a symbol of power and strength. Since then, this has become a global movement, as more community members became involved to increase visibility. Without the passion from Tracy, and her willingness to share her story, I would not have been made aware of FASD.

If you would like to show your support, go to #FASDMonth2022! that everyone is encouraged to use to help change the conversation around FASD. 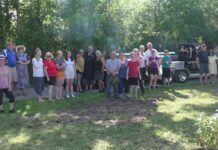 FASD had a fun day outing 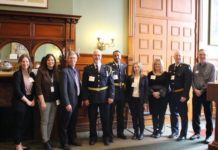