The Kemptville Legion (Branch 212) presented Kemptville and District Home Support Inc. (KDHSI) with a generous donation of $2500 last week. The money was raised through donations, with the bulk of it coming through the two-week poppy blitz right before Remembrance Day.

Poppy Chair, Jay Tousaw, says the donation was suggested by the poppy committee, approved by the Executive at the general meeting, and, finally, by Provincial Command. “We are entrusted with monies belonging to our veterans and we do not take that responsibility lightly,” he says.

The donation is specifically earmarked for veterans’ services, and will help KDHSI continue to run the programming they offer in North Grenville. Although the organization gets funding both from United Way and the local LHIN, they still need to raise $55,000 a year to keep doing what they do. “Donations like that of the Legion are critical,” says Executive Director of KDHSI Susan Smith. Susan estimates that the Kemptville Legion has donated over $20,000 to KDHSI over the past 20 years.

Susan has the utmost respect for the Legion and the support they give to the community. “It really speaks to their service in the armed forces,” she says. “It’s phenomenal that veterans and their families continue to serve the community.”

The donation comes just in time for this week’s celebration of Legion Week. It is an event that Branch 212 looks forward to every year, and is a chance to spread awareness, show members appreciation, entice new members, raise funds, and give gifts. There are a multitude of things happening all week, including a BBQ and pool tournament this Saturday. The BBQ will be from 11:00am to 3:00pm, with the pool tournament starting at 1:00.

The Royal Canadian Legion Branch 212 was formed in April of 1932. It is very active in the community, hosting annual poems, posters, essay, and speaking competitions. They supply bursaries to qualifying students at TR Leger and both high schools in North Grenville, and also make meaningful donations to many local organizations every year. 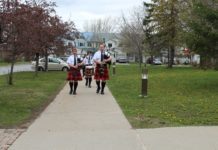 Bayfield residents are not forgotten