The long-awaited arrival of the first LeBoat cruisers arrived in Merrickville last Thursday afternoon, to be met by Mayor David Nash, Town Crier, Michael Whittaker, and a gathering of appreciative residents. The first two cruisers of the LeBoat fleet carried the first visitors of what is hoped to be a host of tourists coming to the area over the summer months.

LeBoat is a European company with teams around the world, and the market they hope to attract to their Rideau Canal route will be primarily drawn from Europe and the United States. Although the first official season begins on June 13, the sixteen boats on the Rideau are already almost 70% booked for this year. To date, the majority of customers are coming from the U.S. They have a choice of two boats sizes: those that can sleep four passengers cost $2,500 a week to rent, while the larger 10-passenger vessels will put you back $4,600 for the week. They were built in Poland, and shipped from there to Montreal, and on to Smith’s Falls, which will be the centre of the operation. This is the North American headquarters of the LeBoat business, and has been preparing for the opening season since last September.

It is now hoped that those first visitors, after their tour of Merrickville and visit to the Gray Art Glass Glassblowing studio, will now go home and be ambassadors for LeBoat, the Rideau Canal, and Merrickville. 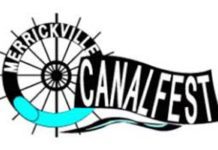 Merrickville owes its growth to the War of 1812