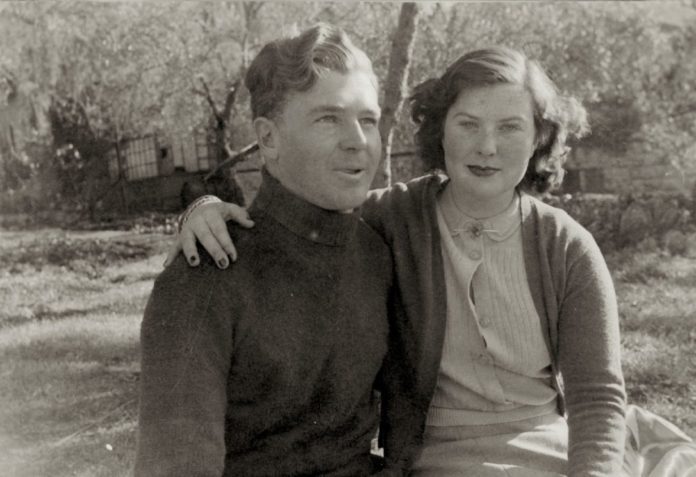 Long before the current interest in local food initiatives, two residents of North Grenville were spreading the word on television across North America and encouraging people to find out more about where their food came from, and how to grow it. Anstace and Larry Esmonde-White were popular hosts of “From a Country Garden”, which ran on PBS for fourteen years from 1986, as well as regularly appearing on CBC television and radio programs. The wonderful thing about their long career in television was that it only began after they had retired to North Grenville after a most amazing life together.

They first met each other when they met on a bridge in their native Ireland. Anstace was just 12 and Larry was 14 years old. When Larry died, just a few months short of his 96th birthday, they had been together for 84 years. Anstace worked at the Remount Depot, Melton Mowbray, England and in Cairo, Egypt for the Catholic Women’s League during World War II. She and Larry married in Mosul, Iraq, in 1944, where Larry was serving with the Poona Horse of the Indian Army. After the war, they came to Canada, where Larry joined the Lord Strathcona Horse of the Canadian Army. Having served around the world, and across Canada, the pair finally retired and most couples would have started to take it easy at that point. But not Laurence George Patrick and Delliana Anstace Esmonde-White.

In 1971 they bought Evergreen Farm, a stone farmhouse with five acres of land in North Grenville, and it was there that Anstace and Larry became international gardening celebrities, hosting gardening shows on CJOH in Ottawa, CBC nationally, and PBS internationally in “From a Country Garden”. The program was immensely successful and ran for 17 years.

CBC Gardening expert, Ed Lawrence, knew Anstace and gives her credit for promoting local foods long before it was popular: “She felt a value in growing your own, far, far before anybody else was a great advocate for growing their own food.” Anstace had been the President of the Ottawa Horticultural Society. On the Esmonde-White Gardens website is a quote which sums up the couple’s approach:

“Growing our own food gives us an additional respect for what the land has provided for us. Equipped with this knowledge and respect, we more readily understand that the foods growing from the earth carry the exact nutrients that our bodies need to be healthy. Growing our food helps enforce the idea that our kitchens are our apothecaries.”

“Anstace and Larry resonated with audiences,” said WPBS director of production Tracy Duflo. “I don’t know if it was because they were a little bit older, because they were Canadian, because Anstace was just so darn cute, but audiences just loved her.”

There was international recognition too. There was an acknowledgement from the Government of Canada in 2006 for “outstanding contributions to the gardening world.” In the same year, the President of Ireland publicly noted their lifetime of achievement in gardening. Anstace died in August, 2016 at the age of 96. The couple left behind a legacy in the years of gardening advice and information they had passed on to people everywhere, in the role model they provided on the importance of local, sustainable foods, and, most especially, in their children, grandchildren and great-grandchildren. They were a wonderful addition to the North Grenville community.