Local initiative, Kindling for Kids, spearheaded by Crackle Pop Kindling owner, Craig McCormick, made its third donation of $500 to Children’s Mental Health of Leeds and Grenville last Thursday. Pictured are the owners of Albert’s Meat Shop, Susan and Michael Simpson, who have sold around 125 bags of kindling in the 10-month period that the fundraiser has been running. “It’s a fantastic cause,” Susan says. “We’ve been on board since the beginning.”

Craig says his goal is to reach the $2,000 mark by the end of the year. The bags of kindling are being sold for $5 at over 25 locations in North Grenville, rural Ottawa, and the surrounding areas. Craig says any store that would like to participate can contact him at 613-277-1106. 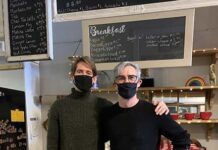 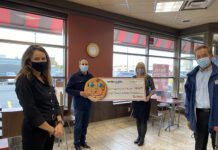