Craig presented CMHLG Executive Director, Lorena Crosbie, with their fourth $500 donation of the year, bringing the grand total to $2,000 donated in 2018. Lorena says the money stays local and allows them to be a bit more flexible in helping children in need. A lot of the money goes towards funding transportation to allow kids to access mental health services outside the community. It also helps fund their Making Play Possible program, which helps kids access extra-curricular activities. “It gives us some discretionary ability outside the budget,” she says.

Willows Agriservices in the South Gower business park is one of the outlets that has signed on to sell the kindling. A new business in North Grenville, they took over what used to be Rooney Feeds in September. Lauren Harman, one of the owners, says they wanted to get involved because they know how important access to mental health services is for many children and youth. “Mental health is such a huge issue,” she says. “Reducing stigma is important, as well as improving access to services.”

Kindling for Kids celebrated their first anniversary in November, selling 1,600 bags of kindling in one year. Craig says he would entertain the possibility of growing the initiative, depending on the location of the business. If new locations are added to the present list of stores, the forecast would be to increase the donation money to the cause in the coming year. 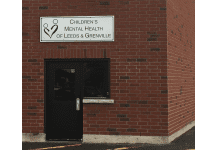