The beautiful storefront scenery in downtown Kemptville hosted a film crew for a day on June 21 as they filmed some scenes for an upcoming Christmas movie. The movie is being filmed by production company Fireside Pictures, whose crew came to Kemptville for one day of shooting after the town was considered to be a perfect fit for certain scenes.

“We were excited about the aesthetic of main street,” said Josie Fitzgerald, Producer for Fireside Pictures. “There were some walk-and- talks that took place in a quaint town, and all the storefronts in Kemptville were perfect, and fit the director’s vision for what those walk-and-talks would look like.”

The filming was for an upcoming movie called “Record Breaking Christmas”, but Josie was not able to disclose many other details, so as not to spoil the plot. The film crew does not yet have a release date for the movie as they typically find out such information later in the filming process. Josie was able to explain that one small hiccup on filming day was the rainy weather, particularly in the morning.

“Filming was a little bit on and off at the start of the day because of the heavy rain, which of course isn’t conducive to Christmas and the snow,” Josie joked. The “snow” is of course a special effect on set. Fireside Pictures uses an Ottawa special effects company to produce the desired effect of making it look like winter, even in summer months. In the case of the scenes filmed in Kemptville, only a light dusting of fake snow was required to produce the desired scenery, though the company still checked in with local businesses first, and ensured a thorough cleanup afterward. “They’re incredible, they make magic happen,” Josie said of the special effects company.

When filming a movie in a small town such as Kemptville, it is natural that passersby will be curious to know what is going on. However, Josie said that this does not cause disruption to the film crew at all. Overall, the crew had a great experience in Kemptville. “I know the crew loved it,” said Josie. “It went well. We had the day we needed to have ultimately. The beautiful storefronts, and that beautiful feel of the town as they were walking, and the day was successful!”

While a release date for “Record Breaking Christmas” is not yet known, North Grenville residents will be sure to have their eyes and ears open for the opportunity to see their beloved central town featured in a movie. More details will be published as they become available. 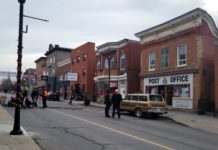