Game one at the Ice Haus arena on the mountain was against an unknown opponent from St. Albans, VT. After a bit of a slow start, the Storm team began to dominate. With #11 leading the way, they cruised to an easy 10-0 victory. A touchdown and a field goal. Satisfied with a good Friday start, the next morning awaited.

The second game was also versus a new team from Massachusetts—the East Coast Wizards. With family sitting comfortably in the raised corner Adirondack chairs, the Storm faced some tougher competition. The first period was scoreless with both goalies making big saves. Early in the second period, #7 had a nice rush from the back-end… rebound… goal! The team continued to pass well and use their speed to great advantage, with #5 making some good plays. Then, with just three seconds left in the period, #14 put her head down for a breakaway and potted one into the corner. 2-0. The final goal midway through the third period was a rebound and scramble to bang one into the net. Storm prevails 3-0. Another shutout.

The afternoon game proved to be a barn-burner; this time from a well-known opponent, the Cornwall Typhoons. The two teams traded chances and battled hard. Both goalies deserved their player-of-the-game awards in a hard-fought 1-1 tie, which was enough for the Storm to move on to the championship game against the undefeated Barrie Sharks (a strong BB team).

In the final, the first shift proved to be important. Just seconds into the game, #3 had a “wily tip-in” to put the Storm up 1-0. Building off that quick lead, the Storm scored again in the first period—another by #3—to put the Sharks on their heels (tail fin?). For some stretches of the period, the Sharks circled but could not strike. They eventually got one in the third, but it was too late as the Storm shut them down to record a solid 2-1 win for the gold medal! 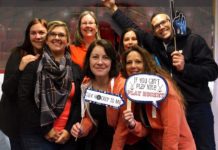 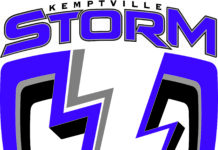