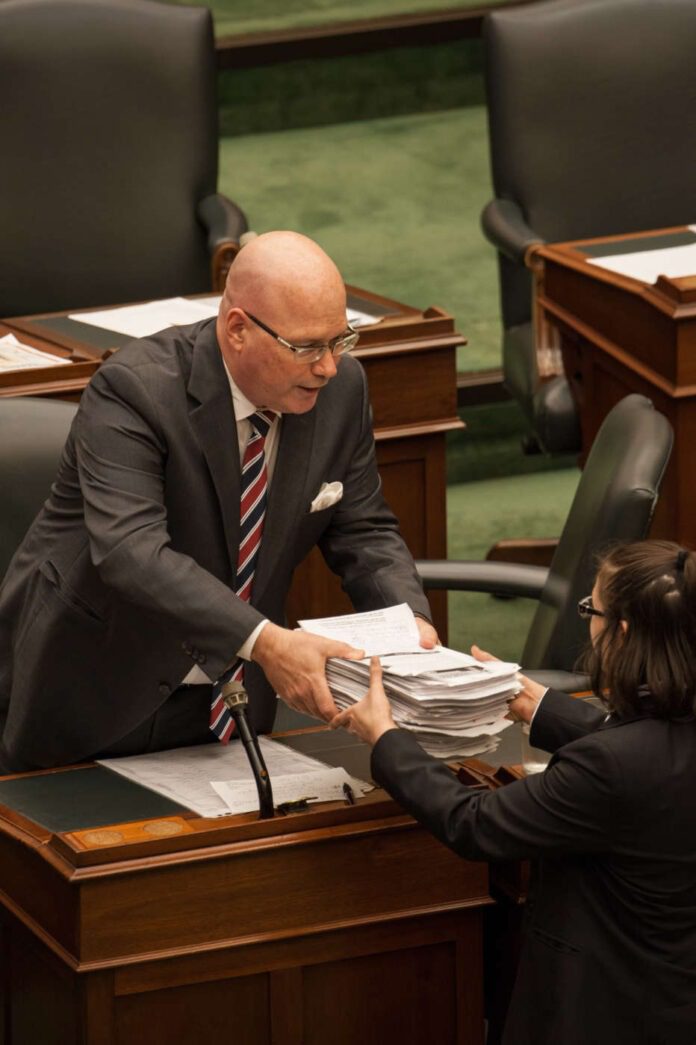 The Ontario Government has announced that the Service Ontario offices in Kemptville will not be closed, as originally planned. The government’s climb-down came after a very long nine months of uncertainty for workers and residents alike, and the decision to keep the facility open is a genuine victory for local activism.
When the closure of a number of Service Ontario offices across the province was announced in May of last year, local residents, workers, union officials, municipal politicians and local MPP, Steve Clark, immediately mobilised to protest the closure of the Kemptville office. Spearheaded by Sam and Amanda LeGoueff, and strongly supported by the Ontario Public Service Employees Union [OPSEU] Local 434, Steve Clark organised a petition to lay before the Ontario Assembly asking the government to keep the offices open. The petition received incredible support from the people of North Grenville and surrounding area, and had more than 10,000 signatures when it went before the government.
Sam LeGoueff welcomed the announcement by the government, giving credit to the community for helping to reverse the closure: “I don’t have words to describe how happy I am! The community came together to fight and we won. I feel blessed to be part of such an amazing community. I firmly believe that Service Ontario would have closed if it wasn’t for the efforts of our local businesses that allowed us to put the petition at their establishments”.
Steve Clark was clearly happy with the victory, but pointed out that it took the government too long to come to the right decision: “It’s about time the Ministry of Government and Consumer Services joined the thousands in our community and said ‘No to the close.’ This is great news for the local employees and everyone who relies on this important service”.
Steve also gave credit to the community for the role it played: “It was a remarkable community effort, ensuring our voice was heard loud and clear by this government. With today’s announcement, we can definitely say they listened”.
The victory that this represents is a remarkable example of what can happen when a community comes together and insists that its voice be heard. Sam LeGoueff certainly believes that, and is very grateful to local businesses who helped promote the petition to the government:
“Canadian Tire, Independent Grocer, Fast Eddie’s diner and B&H Grocery were a few of the many business that participated, but were the businesses that went above and beyond to make sure that their customers saw the petitions. Frank Hoffman, owner of Kemptville Canadian Tire, was always there to offer us his hand. He offered out his establishment to host the rally, where we presented the petitions. This experience has opened my eyes into politics, and I was blown away by the dedication and support of MPP Steve Clark and his office! OPSEAU was a vital part to our success. They were always there with their expertise, experience and guidance. My sister in law Amanda and I could never have imagined that the #SAYNOTOTHECLOSE campaign would have turned out the way it did. We are so grateful and are so happy that Service Ontario will stay here.”
As the Times noted last June, when the petition was handed over to Steve Clark by Sam and Amanda: “When the people speak, it’s not with corporate lies, it’s not with indecision, or academic bows and ties. When the people speak, it thunders through these hills. It’s not a thing that’s mild and meek, when the people speak”. [Dougie MacLean]

Calling all Seniors Groups and Organizations

Letter to the Editor – Fiscal Responsibility

Municipality and Hospice to receive money from Resilient Communities Fund