Recently, as I was going through some boxes of memorabilia, I found a mint condition 1957 Season Souvenir Program of the Kemptville Royals Hockey Team. It seems like just yesterday, I strapped on my pads, tightened my skate laces, grabbed my wooden hockey stick and skated out onto the natural ice surface at the old Kemptville Hockey rink (now the North Grenville Curling Club), but sixty years have passed.

In the 1950s, the Kemptville Royals played in the St. Lawrence League that included teams from Prescott, Cardinal and Morrisburg. Home games were all played on Monday night in Kemptville. The 16-game season began on January 7 and ended on February 28.
Fan support was good, possibly because there were not many TV’s around then and most of the players on the team were local boys. I recall one time we had 2,251 paid admissions to a game in Kemptville (in 1957 the town’s population was slightly more than 1,500). For our next home game and the remainder of the season, admission was restricted to the first 1,500 spectators.

In 1957, the Royals had sixty local sponsors, today only two remain – the Bank of Nova Scotia and Eastern Breeders (EastGen). Our team manager was Earl Boucher. Our coach was the legendary Lloyd Laporte. Laporte was the coach of the famous Inkerman Rockets Junior team for more than a decade during the 1940s and early 1950s.

There is a short bio in the program on each of the players – Cecil `Ace’ Bailey, Lyle Pitt, Grant McIntosh, Ralph Hurley, Lowell Craig, George Green, the twin brothers Erwin and Edwin Duncan, Manford Boal, Denzil Crowder, Cliff Baldwin, Ted Holmes, Glenn Pominville, and myself. There were three “imports” on the team, Don McIntosh, Don Smith, and Jack Warner. However, due to the ravages of time, I don’t remember much about those three players.

Many people were involved with the team at the executive level, but today only three are still alive – Jack Higgins, who was Vice-President, Don Armstrong who was a Director and Pat Maloney who was the Assistant Manager of the team.

There are also stories in the program on the history of the Citizen Shield, “The Owl’s Nest”, “Kilroy’s Ghost” and the Kemptville Royals. The 24-page souvenir program, with a wealth of information, sold for ten cents.

Thanks to Jim Dolan for submitting Sam’s story and the photograph, lent to him by his brother-in-law Glenn Pominville. It shows the Kemptville Royals taken during the mid 1950’s. Many of the players in the photo were on the 1957 team featured in Sam’s article. The team sweaters display the name Ramblers.

The sweaters were compliments of the legendary Hockey Hall of Famer, Frank Boucher. Boucher grew up in Ottawa, before settling in the Kemptville area in 1938. Boucher had acquired the sweaters from the Philadelphia Ramblers, a farm team of the Rangers.

Boucher played for the New York Rangers in the 1920s and 1930s winning the Stanley Cup in 1928 and 1935. Boucher won the Lady Bing Trophy 7 times during his career. In 1939, Boucher became head coach of the Rangers and coached the team to victory over the Toronto Maple Leafs in the 1940 Stanley Cup final. If anyone has a picture of showing the outside of the old rink from around 1957 could you please contact Jim Dolan at 613 258-3374. 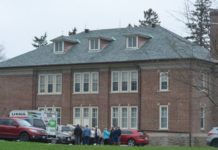