Last week’s community grant request presentations during two North Grenville Council meetings showed the diverse range of programs and organizations that exist in the local community. One such organization is relatively new on the scene – Kemptville Pride Inc, which was established in 2019. Their presentation was given at the November 24 meeting.

Kemptville Pride’s specific reason for requesting funding is to support their goal of providing training within the North Grenville community to aid in the acceptance and inclusion of the LGBT2QS+ community locally. Currently, Kemptville Pride relies exclusively on donations to provide its services. The proposed training would be offered to schools, local businesses, law enforcement, and others within the community who wish to establish themselves as a place of acceptance. Organizations and individuals who receive the training will be able to proudly communicate their support with a decal to be displayed at home or work. The training will cover such topics as LGBT2QS+ terminology, pronoun usage, debunking myths and stereotypes, the effects of trauma within the LGBT2QS+ community, and more.

One of the presenters from Kemptville Pride, President Devon Warren, told a story to Council which she herself had heard that very same day. She recounted that an LGBT2QS+ youth at a school in Kemptville was bullied, and due to a lack of training and experience, the adult who dealt with the issue resorted to victim blaming. Her co-presenter, Melissa Button, told of recently having a youth come out to her in the privacy of her office at the bank where she works, as this was the youth’s only safe space to do so. These stories unfortunately fit with an environmental scan of the North Grenville community, completed by Kemptville Pride, which found a lack of LGBT2QS+ education and awareness locally.

“You shouldn’t have to go to a local bank to get [support],” said Melissa. The presenters pointed out that, while several local businesses have diversity and inclusion training as a key mandate, it will not be possible for Kemptville Pride to provide this without proper funding. Several local businesses have already expressed interest in participating in the pilot program to test out the training.

A few questions were posed after the presentation, including one from Councillor Strackerjan, who questioned whether relying on grants year after year is a viable long term financial plan. Devon and Melissa acknowledged this, and expressed an intention to create a strategic financial plan.

A key argument used in the funding request is that there has been an increase in violence recently toward the LGBT2QS+ community, particularly in the Old Kemptville area. An incident on June 8 made headlines both within and outside of Kemptville when a rainbow pride crosswalk at the intersection of Prescott Street and Reuben Crescent was damaged with tire skid marks. A woman was initially charged with mischief in relation to the incident, but the charges were dropped due to contradictory evidence. It remains unclear whether the act was intentional.

Community grant funding requests, including the request from Kemptville Pride, will be deliberated by Council early in the new year. 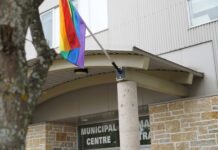 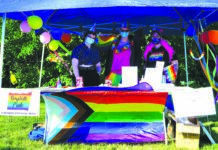 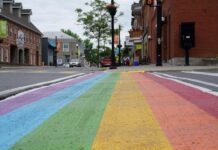