Things have changed a lot in North Grenville over the past few decades, and it’s fascinating to take a close look at some of those changes in detail. Back in 1951, the Eastern Ontario Development Association published a brochure on communities in the region of the St. Lawrence Seaway. Their statistics on the Village of Kemptville as it was then make interesting reading.

The housing situation also compares with today’s situation: “Construction presently meets demand. Sites are available with sewer and water. There are sufficient rental units. There is a town plan in effect… Zoning by-laws are awaiting approval”. In 1965, it was reported that: “New areas are being opened up, houses erected, with modern conveniences and roads are laid as quickly as possible….back of the Anglican Church area, new roads are being completed, and cosy homes built.”

Industrial development sites were available, with sewer and water services, from $1.00 to $2.00 per acre. The main employers in the Village were The Borden Co., producing milk, with 40 employees, and Moore Business Forms, employing 25 people. (The Manager of Kemptville Creameries, Ltd., Lorne Reddick, later complained that his company, which employed 15 people, had not been included in the brochure.) There were 35 stores in Kemptville, and just one bank, the Bank of Nova Scotia.

It points out that the nearest crossing point to the United States was a ferry operating out of Prescott, 29 miles away. Transportation infrastructure included the C.P.R. railway line between Prescott and Ottawa, and Highway 16, linking the same two destinations. 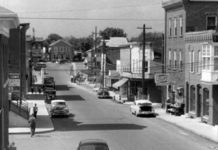