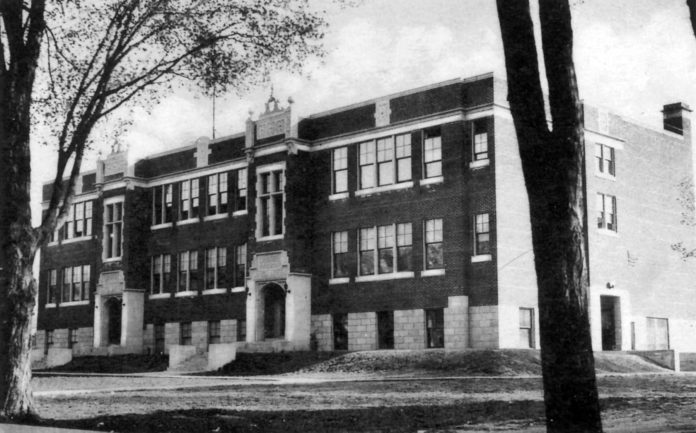 Here is a building that looms large in the memories of many people in North Grenville, for good or ill. For over 80 years it has stood on Prescott Street in Kemptville, seeing generations of young people come and go, watching over Remembrance Day ceremonies and parades. On this site, in 1888, the original Kemptville High School had been built, and, in January, 1936, that school burned down under suspicious circumstances. Three months later, the Public School, on the site where the B&H Store is today, also burned down in mysterious circumstances. It was a bad year for schools. Classes were then held for various periods of time in the Town Hall (now the Court House on Water Street), the Salvation Army hall, the Wallace Block building (now Mr. Mozzarella Pizza), Kemptville College, the United Church hall, and the Odd Fellows’ Hall.

It was decided to replace both schools with a combined Public and High School.  The cornerstone was laid on August 15, 1936, and the school was officially opened by Dr. Duncan MacArthur, the Deputy Minister of Education, on December 21, 1936. The photograph here was taken in 1937, when the building was brand new. The new school included a combined gymnasium and auditorium, a general shop, a home economics room, and a science lab. All of these were novelties at the time, and put the new school at the forefront of modern education at the time. One door had the words “Kemptville High School” and the other door “Kemptville Public School” inscribed in stone. The school was enlarged in the 1950’s, and the Public School moved into its own building in the 1960’s.

Today, the old High School has been replaced in its turn with the new North Grenville District High School, and the old building is to be disposed of by the Upper Canada District School Board. Will it survive in a new role, or is it coming to the end of its productive, memory-filled life. History marches on.