Is Kemptville becoming the new Hollywood? That seems like an appropriate question given the number of films that have been partially filmed here in recent months, with two being filmed in the last few weeks alone.

On December 5, some scenes for an upcoming made-for-TV movie called “Valentine Nebraska” were shot in downtown Kemptville, with a section of Prescott Street closed and appropriately set for the occasion. It turns out that Valentine is a real town in Nebraska, with Kemptville playing the part for the purposes of the movie with the same name.

As is necessary when filming a movie, the section of Prescott Street used in the filming had to be transformed to reflect the artistic vision of the filmmakers. It is clear that it is not just officials from the Municipality who were on board with the filming, since several of the businesses on Prescott Street were decorated to play their role in the movie. One business – the former Butler’s Victorian Pantry – was even completely transformed, bearing a large sign reading “Post Office”.

Production Manager Jackie Massar explained more about the movie. “It’s a Hallmark Valentine’s Day movie, so a little different – and refreshingly so – than the usual Christmas ones we do,” she said. “We’re an Ottawa-based production company and Kemptville is close enough for our cast and crew to travel to daily rather than putting up in hotel. It doubles as a great Main Street for a small town, which a lot of these movies take place in. Kemptville has beautiful old architecture and a quaint, charming feeling to it that’s cozy, intimate and friendly. Our viewers at Hallmark love this, so we’ll keep coming back as long as you’ll have us!”

Just one week prior to the filming of “Valentine Nebraska”, on November 29, another film called “Christmas By Design” was partially shot in downtown Kemptville. Earlier this year, in June, Kemptville’s downtown was the site of some filming for a movie called “Record Breaking Christmas”. At that time, a Producer told the Times that Kemptville was chosen for its “quaint” small town feel. The feeling appears to be mutual.

With Kemptville being chosen as a set for multiple movies recently, Mayor Nancy Peckford is calling the exposure good news for the Municipality. “The intention, with partnering on these film productions, is we get North Grenville on the radar, she said. Mayor Peckford added that the publicity helps show that North Grenville is “scenic and compelling”.

“We get some really good, sort of free, advertising… just from the film companies themselves because we’re building relationships,” she added. “Just like any other sector, where you are on the radar and someone can recommend your community to another film production company, the power of the word of mouth is very, very valuable.”

“Valentine Nebraska” will air on the Hallmark Channel close to Valentine’s Day. To see Kemptville on screen without the wait, check out “Record Breaking Christmas”, which is set for release today, December 15. The trailer can be viewed at https://www.imdb.com/title/tt22751010/. 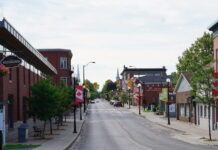