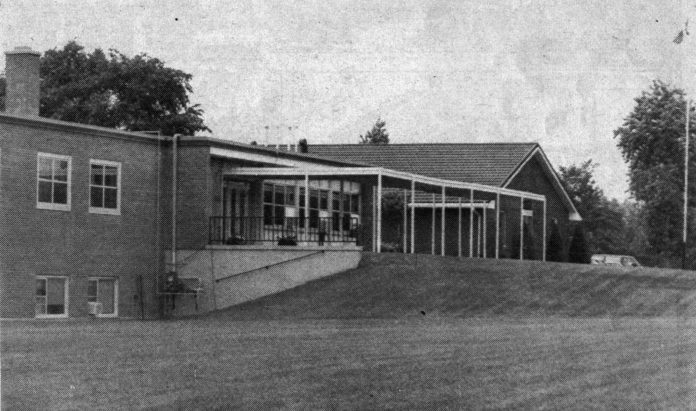 This year, Kemptville District Hospital begins to celebrate 60 years of growth and service. It was in 1959 that construction began on the new facility, supported by an enormous outpouring of support, financial as well as moral, by the surrounding communities. This was not just a hospital for Kemptville, but for Oxford-on-Rideau, Merrickville, Wolford, South Gower, Mountain and Osgoode also.

KDH has been a valued and vital part of North Grenville since 1960, when it was officially opened on June 29 of that year. In 1955, a provisional charter for a hospital was granted by the Department of Health, and an organising committee was formed, but lack of financial support meant that effort, too, failed to go forward.

Finally, in 1958, when the Winchester Hospital could no longer cope with the numbers using that facility, a public meeting was called in Kemptville, attended by more than 400 residents from around the region. It was decided to raise funds for a 32-bed hospital, and the immense sum of almost $200,000 had to be raised, in addition to the funds donated by government and charitable institutions. In September, 1958, six acres of land were bought on Concession Road in Kemptville, and construction work began in April, 1959. But costs were rising, as well as the walls. An extra $150,000 was needed, so fund raising continued; but by February, 1960, all the money raised had been spent, and the campaign was actually in debt by $25,000! But the building continued, along with the fund raising, and the doors were officially opened on June 29, 1960 by the Ontario Minister of Health and Marjorie Hawkins, Administrator of the new hospital.

In 1964, the hospital achieved accredited status from the Canadian Council of Hospital Accreditation, and it has not looked back since. Growth continued in the mid-1960’s, with another twenty beds added, allowing for improved services in Radiology, Physiotherapy and Emergency services. Then, in 1985, a long-term master plan for development was drawn up, which led to further expansion, including the building of the Health Unit building. The entire community of North Grenville, as well as many surrounding communities, has benefited greatly from the vision and drive of those residents back in past decades who worked hard, raised funds, and pushed through the concept of a modern, professional medical facility to benefit their neighbours.

After years of planning and fundraising by a determined group of local volunteers, what was a small rural hospital has evolved into an integrated health services organization, focusing on building healthier communities. Accredited with Exemplary Standing, it provides primary-care management services, acute-care hospital services and advanced orthopedic care. Visit Kemptville’s hospital, renewed for the 21st century.

In the coming months, the Times will publish more stories of KDH and its origins and growth over the past 60 years.