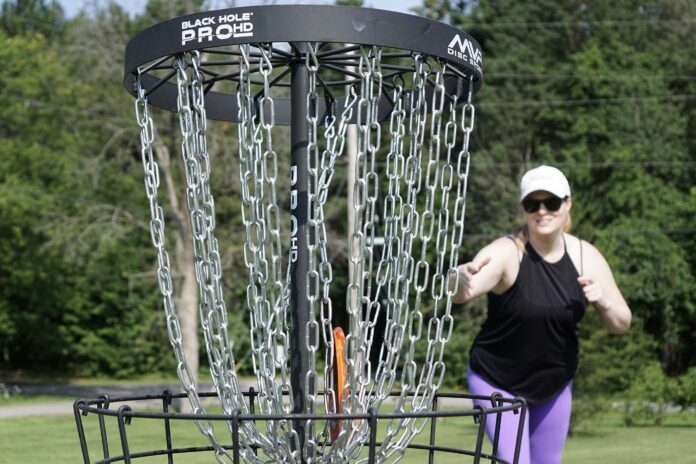 Following the launch of the Kemptville Disc Golf Club (KDGC) at the Ferguson Forest Disc Golf Course in July, discs have been donated to the North Grenville Library and the Kemptville Youth Centre to ensure the sport is accessible to all members of the community.

KDGC President Dwayne Dowdell explained that setting up the Disc Golf facilities has “really been a community effort”. Tammy Hurlbert, Recreation Coordinator for the Municipality, helped to set up the North Grenville Public Library with four sets of disk golf disks.

While disk golf can be played casually with a regular frisbee, specialized disc golf disks are more aerodynamic, and come in sets with a variety of weights. Differently weighted disks can be switched out throughout gameplay to serve unique situations, as one would with golf clubs.

Dwayne said that Tammy “fell in love fast, as most people who get involved with disc golf do. And because of Tammy’s experience in the recreation world of North Granville, she recognized that there are certain barriers for people to participate, due to the cost of acquiring equipment.”

Tammy ensured residents would be able to access the basic equipment required to play by making them available to borrow from the Library. She purchased the sets from Craig Brown, of Kemptville Training Centre. Craig, after falling in love with the game himself, offers beginner sets at a reduced cost.

According to Dwayne, these loaner sets have been a hit with the community. Not only is there no cost associated with using the Disc Golf course, but the equipment rental is free as well.

Dwayne says that the youth of KYC have “embraced it.” Dwayne and Craig have done a tour and informational session with some of the youth, and believe the new sets will be well used.

Dwayne explained that KDGC “members have stepped up and helped out in huge ways to promote the sport in the community because it’s got so many benefits.” The sport is certainly an accessible one, available to a wide range of ages, fitness levels, and physical abilities.

Dwayne’s wife, Dana Collings, notes that she appreciates that you “don’t compete against anyone but yourself. You only try to be better than you were before. That takes some of the competition out of it, and just makes it a little more chill.”

For those who crave the competitive edge, however, the KDGC is starting up a league. Starting on August 6, league play will be every Friday night. A member of the Ottawa Disk Golf Club will be helping the KDGC to organize the numbers and statistics involved with league play.

Just like other league sports, players will carry their points with them throughout the season. Prizes for a number of divisions will be awarded at the end of each season.

Handicaps will be incorporated to give less experienced players a chance against more seasoned ones. There will be a modest fee associated with league play. While league play does encourage some competition, it is really intended to serve as an organized and social occasion to play.

Dwayne encourages the community to “take it to that [league] level, or just come out, enjoy nature, and play for for the fun of it.” Our Ferguson Forest Disc Golf Course is certainly beautiful. The course is entirely noninvasive, using only the existing environment as hazards to play around. “The Disc Golf community is really tight knit,” explained Dwayne.

“We are getting people driving here from Ottawa, Brockville, the far east and the far west. This place is steady with players.” The KDGC hopes more of the local community will get involved in the sport.

It’s “the more the merrier” as far as Dwayne is concerned.