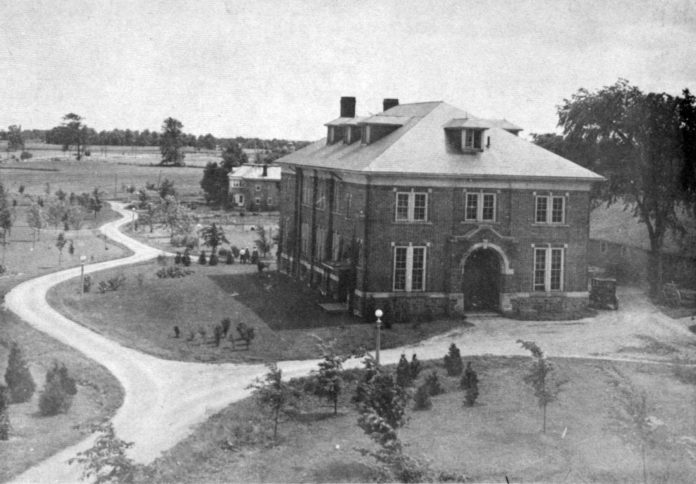 The photograph shows two buildings that formed the core of Kemptville College in its early years. In the background is the renovated farmhouse of the Murphy farm, and the original Gym and Judging Pavilion is in the front. Kemptville College was established as Kemptville Agricultural School in 1917, with an investment by the Ontario Government of $50,000. The School’s existence in Kemptville owed much to the influence of a local resident with a position within that government.

On September 21, 1916, the Kemptville Agricultural Society were holding their Annual Fair. The guest of honour was the Honourable G. Howard Ferguson, Ontario’s Minister of Lands, Forest and Mines and local boy made good. The country was in the middle of World War 1, and the area needed some good news, which Ferguson was happy to provide. Stealing the thunder of the Minister for Agriculture, whose announcement it should have been, Ferguson revealed that the Ontario Government would be establishing “a two-year course in Agriculture and Domestic Science in the Village of Kemptville”. As an ex-Reeve of the Village, and coming from a family with deep roots in the community, it is, perhaps, only fair that Ferguson got to break the good news.

But it would take some time to get the courses operating. First of all, land had to be found, and two farms were bought in 1916 from Thomas Murphy and Alex Armstrong, one on either side of the Ottawa-Prescott Highway (now CR 44) in Concession 4 of Oxford-on-Rideau Township. Over the years, the College would purchase other parcels of land. The house on the Murphy farm had been built by an earlier owner, Thomas McCargar, in the 1840’s and was completely renovated in 1918 to house the new President of the Kemptville College, W. J. Bell, and his family. Over the years, various alterations were made to the building, and it still survives today as the home of the North Grenville Co-operative Preschool and Learning Centre.

It was not until 1919 that classes officially began at the College, then known as the Kemptville Agricultural School, when short courses were offered in Farm Power, Agriculture and Domestic Science. The old barns on the Murphy farm were torn down and a new Judging Pavilion and Gymnasium were built in their place. This building is today known as Purvis Hall, and later contained the Library for the College on the upper floor. This space was used as a Hall and Gym, where sports like indoor softball and basketball were played. Regular dances were held there over the years, as well as dancing classes.

The downstairs space has seen many events over the years, but was originally used for livestock demonstrations and classes. In 1919, there were 444 students using the building. From 1927, when the first College “Royal” was held, students showing their cattle would walk them across the highway from the farm buildings and into the Judging Pavilion. The building was used for the Royal down to very recent times. Today, the future of the campus is still unclear.

Letter to the editor – Kemptville College