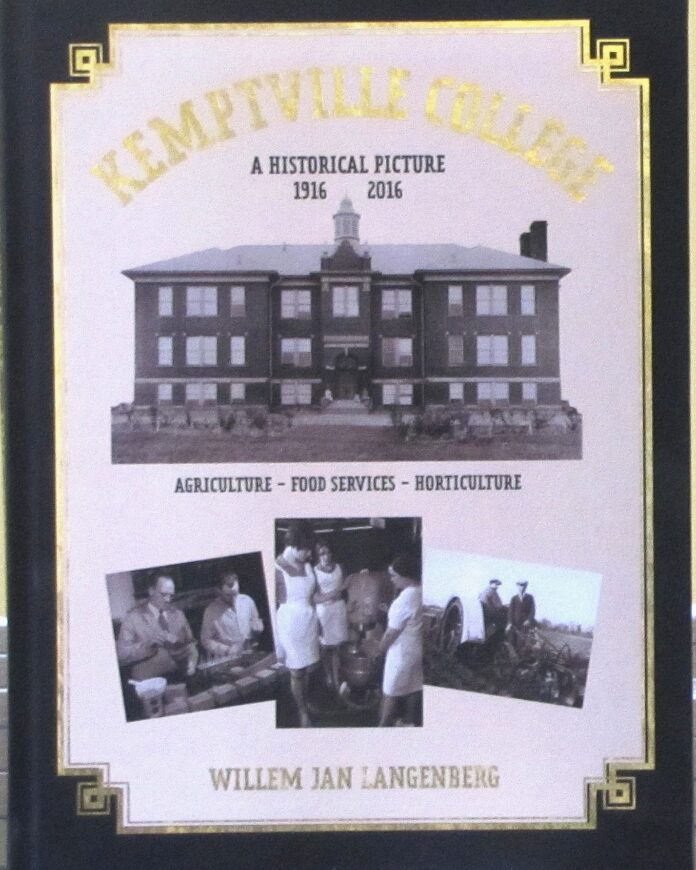 Kemptville Agricultural College played an important role, not only in agriculture, horticulture and food education but also in the development and growth of the Old Town of Kemptville.

The book is written in 10-year increments, showing the colourful start of this prestigious college during the twenties, life on campus during the dirty thirties, and then the wartime period during the forties, when students were trained at the old fire hall in Kemptville to go to war in Europe.

During the fifties, student enrollment increased as many European farmers arrived in the region. During the sixties, the college expanded with the construction of many new red brick buildings. During the seventies and eighties, horticultural education expanded into various categories, like organic gardening and ornamental horticulture, such as landscaping. By the mid-80s, the horticulture section grew 35,000 bedding plants of which the surplus was shared with the residents of Kemptville.

Turmoil in agricultural, horticulture and food service education in Ontario started in the early nineties when the Ontario Ministry of Agriculture, Food and Rural Affairs went through a re-organization of its ministry and divorced itself from Agricultural Education and disposed of its agricultural colleges.

Through a 20-year transition, Kemptville Agricultural College became a satellite campus of the University of Guelph in 2008. Kemptville College’s education became a Guelph-designed academic training.

Kemptville College’s closure and how this closure was organized are described in detail, showing how politics can destroy a well-functioning educational system.

The students at the College over the years made numerous “farm tours” to many places in the region that do not exist anymore. One such annual trip was the famous Glenayr Kitten Mill in Lanark.

This book was written by using all the written documentation obtained from the students’ yearbooks, including lots of photographs, that were produced throughout the years. Some parts are actually hilarious to read. The book, retail price $66.37 +HST, or $ 75.00, is available at B&H Grocery Store on Rideau Street in Kemptville.

For more information or ordering, please contact the author at [email protected]