Brockville Braves were in our barn for a battle royal, as they were handed a 4 to 1 loss by the boys in Sunday’s matinee challenge. Initial period was a frantic, exciting, hard hitting affair as both teams could not find the back of the net to remain at a stand still at 0 after 20 minutes. Both the Braves and 73’s recorded 7 SOG, and only one infraction to spend time on the slab.

Man advantage, as Lammi dropped it back to Bond on point to slam it at Aiden Hosein, and Chase Broda PPG, picked up the garbage at 14:49, after numerous iron shots, to put the 73’s on the board. 73’s doubled up on the Braves with 12 to 6 SOG, and they had 3 unsuccessful PP attempts.

Final twenty, with Kemptville in the drivers seat, Moretti screamed over the line to find Wood on point, as Ryan Pawlikowski trailing, aimed it top shelf to make it 2-0 at 4:23.

Brockville spoiled Riley McCabe’s SO at 12:40 when, on PP, Will Torriani, with helpers from Casey and Kerr, buried a rebound glove side. Brockville pulled their stopper at 17:59 for extra attacker and Kemptville aggressively stole the rubber for a SHG, as Suzuki stripped the puck over to Wood that broke Chase Lammi free to find the open area at 18:02. Broda won the battle of the half boards, with Brockville on attack with extra man, to spring Easton Ryan free to hammer it home for EN at 19:28. Braves came on with 12 SOG to 73’s 9, and Kemptville with PPG on two opportunities, with Brockville one on 4.

“December has been great for us, complete team effort with strong defensive shown and very happy for the staunch showing for Riley McCabe in today’s session”, as per coach’s comments.

Road contest into the Bear’s Den on Friday evening to meet the Smith’s Fall’s Bears was another successful trip for the 73’s, as they defeated them 2 to 1 in OT.

First twenty remained scoreless, with the only marks on the sheet for sin-bin time, as Kemptville posted 6 PIM and Smiths Falls had 31 PIM. Riley McCabe was recipient of a vicious hit that removed him from the game at 16:28, and William Anderson was called on for rest of the night. 73’s out-gunned the Bears by 16-10, and you already know about a very undisciplined period.

Smiths Falls opened the second when Brody Fournier, assisted by Villalta and Dempsey, to beat William Anderson at 17:04. Bears over 73’s by 10-8 and no PP on 4, as Kemptville couldn’t capitalize on 1.

Kemptville even it up when Taylor, on PP, dropped it to Wood so Jared Patterson PPG could pick up the spoils to drive it by Victor Desjardins at 16:25 to force OT. Bears out-shot 73’s by 9 to 7 and recorded 27 PIM, with Kemptville’s 12 PIM.

OT was no contest, as Brazier and Jared Patterson combined at just :13 after the whistle to give the boys their fifth win in a row with a 2-1 victory. Kemptville had only one shot on target that they made count.

73’s PK was alive as they shut-down the Bears’ strong attack with eight PP attempts and stout goal tending to keep the boys in the game.

Coaches Diggers Award is given to the wheel man team captain, Jared Patterson, with his aggressive work ethic and constant tenacity, never give up attitude, and leadership qualities.

Your team would love to see you out at their next back to back home games, when they meet with first place Carleton Place Canadians on Thursday, December 19 at 7:30, and then on Friday, December 20 to face the Navan Grads at 7:30. 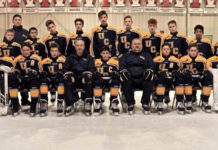 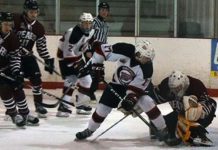