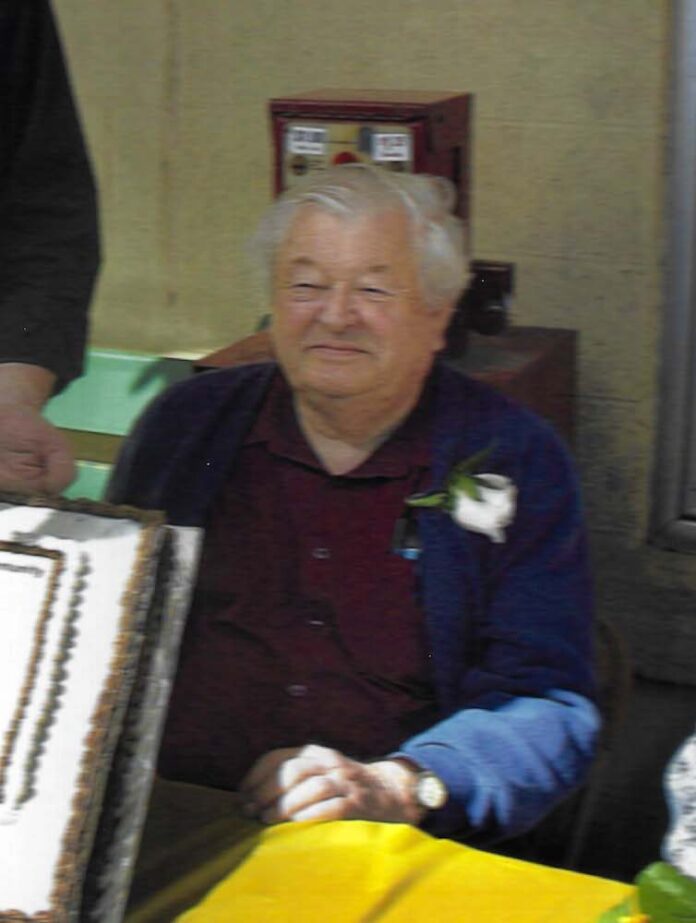 When Keith Beveridge arrived in Kemptville in 1963 with his wife Donelda, and a son and daughter both under 4 years of age, he became one of a small number of business people who watched the Village of Kemptville become the Town of Kemptville, and then the main urban centre of a new Municipality in 1998. In the process, the retail business he established with partner Ken Haggett became a centre in itself: a community centre, where traditional values of integrity and civic engagement were treasured and maintained.

Keith had left school after grade 10 to find work in construction in Brockville, where he was able to develop his love of woodworking and carpentry. But in 1951, the construction industry was in a slow patch and Keith was laid off, so he took a job in the Dominion store in Brockville, and moved on to the produce department in the Brockville IGA store, beginning a lifetime career in retail.

He quickly rose to the produce manager role and by 1955 became the store manager at the brand new North Gate IGA on Highway 29. By 1956 the IGA owners sold their six stores to M. Loeb Ltd. and Keith’s ability was quickly noticed by Bertram Loeb. In 1963, when many of Keith’s colleagues were purchasing the stores that they had managed, Bertram Loeb convinced the 28 year old and Ken Haggett, who worked for the same group of stores, to purchase the store in Kemptville. They renamed it the B&H Foodliner IGA, and B&H stood for Beveridge and Haggett, naturally.

Ken, known as “Red”, retired from the business in 1978 and Keith continued to expand the store over the years, earning a reputation as a generous supporter of whatever good cause needed help in his community. He and Ken had opened a second store in Osgoode in 1968 (named the H&B), and, after Keith’s son Jim joined the business in 1984, he took over the running of the Osgoode store. When Keith began to suffer the effects of dementia, the Osgoode store was sold and Jim took over the Kemptville location full-time.

The reputation that Keith Beveridge gained over the decades was built on honesty and standards, both professional and personal. He was a businessman of an old school, an approach to life that placed great emphasis on integrity. This is, perhaps, most clearly shown in a story told by another man entering the retail trade in Kemptville in later years. Terry Butler was sent to open a Giant Tiger store and was recommended to talk to Keith about it. Instead of resisting another retail outlet beside his own, Keith welcomed Terry in his own way. As Terry told the story, his regional boss at Giant Tiger asked him if he’d talked to Keith: “I said, yeah, we’re going ahead. He asked if I had any contracts, or anything, and I said no. But I had asked Keith about that and he’d said ‘I shook your hand, didn’t I?’ And that was it. Eventually, the lawyers got at it, and there were contracts. But to Keith, the handshake was what mattered. He shook my hand and looked me in the eye, ‘So I’m digging a hole and putting a store in it!’”

There are probably many other stories like that one, known only to those who saw Keith’s character in person and in private. The man’s approach to life and business is reflected in the story of the B&H then and now, as the store continues to support every good cause in North Grenville, promotes local growers, and maintains a local identity in the face of large corporate competition. It is the only one of Kemptville’s supermarkets to be totally independent and local. That is the legacy of Keith Beveridge.

Keith died on June 4 in his 88th year, five years after his wife of many years, Donelda (Donnie). Although many newcomers to North Grenville will not have had the pleasure of knowing him, amd may not even have heard his name, this community will continue to be blessed by the contribution he made in his very generous and valued way. And his name remains as part of the B&H identity.

Those who wish to mark Keith’s passing may make a memorial donation to the Osgoode Care Centre. A community Celebration of Keith’s Life will be held at a later date.