As the last pieces of furniture were lined up, shoes unpacked from boxes, and pieces of silver were polished, the Kemptville District Hospital (KDH) Auxiliary took a few moments on the afternoon of June 8, 2018 to recognize the contributions of the long-serving volunteers at its major yearly fundraiser, Hey Day.

Set-up was now complete for the 58th annual giant garage and yard sale, and all was in readiness for the eager bargain-hunters who would be lined up outside the doors of the Kemptville Curling Club a few hours later.

Jolene Stover, the energetic Convener of Hey Day for four years running, stepped up to the microphone. She began to call out the names of the volunteers who had helped out at Hey Day for 10 years or more.

This took several minutes, as 77 names were called out, and those in attendance lined up for a group photo. Jolene was visibly emotional as she expressed the Auxiliary’s gratitude for this inspirational commitment to their annual fundraiser for Kemptville District Hospital.

She noted that there were an additional nine volunteers who had helped out at Hey Day for 25, 30, and 40 years or more: Crawford Barkhouse, the Churchill Family, Norma Fisher, Liz Forbes, Bev Fry, Marian McGahey, Avalon Pinhey, Cecile Prodonick, and Eleanor Scott. Three of these – Marian, Avalon, and Cecile, had been volunteering at Hey Day since the beginning.

Marian remembered the first organizing meeting at the home of Mary Prosser, the founder of Hey Day, in 1959. Mary had decided they needed to hold a fundraiser for the hospital; at that point they were raising money to build the hospital – its doors wouldn’t open until June of 1960.

Marian and Avalon reminisced about the days when the arena had a dirt floor that got muddy when it rained. In the early days, there were ducks and chickens for sale at Hey Day, as well as goats and other farm animals. Not to mention bales of hay. Although some volunteers speculated that the fundraiser’s name was a result of the sale of hay, Marian and Avalon set the record straight: the name was meant to signify “when you do something big!”, as per the Oxford Dictionary’s definition of ‘heyday’ as “the period of a person’s or thing’s greatest success, popularity, activity, or vigour.”

Marian and Avalon also recollected that the annual date of the second weekend of June was selected as local Moms would have received their family allowance cheques and have some money to spend, at a time when the monthly government family allowance was $3 per child.

Avalon and her husband, Harold, looked after collecting and counting the money at Hey Day for many years. Marian, whose four children were all born at KDH, has been in charge of the ‘What Have You’ table for longer than she can remember. She explained that whatever doesn’t seem to fit at another booth goes at the ‘What Have You’ table. Both women have been President of the Auxiliary at various times over the years.

Well-known Kemptville resident, Norma Fisher, has been volunteering at Hey Day for 46 years. She works in the silver, crystal and china department, personally polishing every piece of silver donated by the community to be sold at Hey Day. Norma has no plans to retire from the annual event!

Liz Forbes started volunteering at Hey Day in 1971. As a 17-year-old, she was helping out Gert Barkley, who ran the jams and jellies department. Gert’s husband Ernest ran the bingo, and that year had a “young lad” working for him. Liz and the young lad got talking at Hey Day and “the rest is history” – they married a few years later and are celebrating their 44th anniversary this year.

Liz recalled that sometime in the 1970s, the jams and jellies department was replaced by the Cakewalk, an extremely popular feature at Hey Day that volunteers and shoppers alike are still talking about. Members of the community would donate their best home-made cakes, as many as 90 each Hey Day, and people could buy in (for 25 cents, originally) for the chance to play a version of musical chairs. If you were lucky enough to land in a chair, you would win the cake associated with that chair. The Cakewalk was particularly popular with children, who would get in the Cakewalk line-up as soon as they entered the building. Liz now works in the ‘Boutique’ section of Hey Day.

Crawford Barkhouse has been volunteering at the event for 43 years, since he moved out from Ottawa to the River Road, not far from where Hey Day founder Mary Prosser lived. He remembers selling hay and small farm equipment at the event. For a number of years now he has been in charge of the furniture section, where shoppers can find tables, chairs, lamps, pictures and more inside the curling club – and out back, bicycles, tools, vacuums, lawn equipment, lawn tractors and more. At one point, Crawford left the River Road neighbourhood and moved to nearby Merrickville, but that hasn’t stopped him from coming back to help out at Hey Day year after year.

Eleanor Scott has been volunteering at Hey Day for more than a quarter-century and is the niece of Mary Prosser. Eleanor has memories of coming to Hey Day as a five-year-old with her mother Fern Prosser, who was also an active volunteer;. When Eleanor was 13 or so, she started helping with the sorting of donated items. She remembers goats and geese for sale in the earlier years and, one time, two little piglets in a crate. She has been helping out in the shoe department for several years.

Eleanor remembers piling into the family truck along with her six siblings for the annual outing to shop at Hey Day. “Nobody had a lot of money then, and you could outfit your whole family at Hey Day without breaking the budget,” she said.

Several of the long-serving volunteers commented that, “Once you start volunteering at Hey Day, you don’t stop!” Connie Parsons, the current President of the KDH Auxiliary, echoed that sentiment, adding that, “Hey Day volunteers come from all over, with several coming from Montreal, and even one who comes all the way from Penetanguishene every year to help out.”

For the volunteers who come back year after year, Hey Day is an important social event – a chance to reconnect with people they may not have seen since the previous Hey Day. Along with the opportunity to support their local hospital, this seems to be what keeps people coming back.

KDH threw a pizza party on June 13, 2018 to thank the Hey Day volunteers. Approximately 90 volunteers of all ages attended the inaugural event, held in the hospital’s courtyard and courtyard lounge. A number of the volunteers said how nice tit was to have the chance to visit with each other in a relaxed setting away from the hustle and bustle of the fundraiser.

Frank J. Vassallo, KDH’s CEO, expressed his appreciation to the Hey Day volunteers. “On behalf of our staff, physicians, and our Board of Directors, please accept our gratitude for your longtime commitment to our Auxiliary’s annual fundraiser. KDH is so fortunate to be the beneficiary of the generous gift of your time, year after year. Funds raised at Hey Day are used to purchase essential medical equipment for patient care. This means that your efforts put the best tools into the expert hands of our healthcare teams.”

The last word goes to Convener, Jolene Stover: “We are so proud that the KDH Auxiliary has one of the longest running annual events of its kind, with perhaps the most volunteers! It takes about 200 volunteers to make Hey Day happen every year, and we are grateful for every single one!” 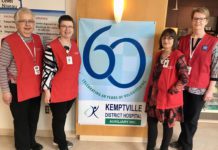