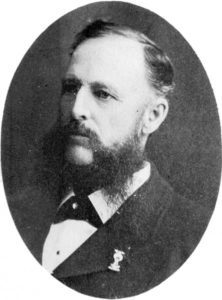 John Walter Harris was born on February 26, 1845 in Oxford-on-Rideau Township. His family had immigrated from Ireland and his father and grandfather settled on land on Bedell Road, Lot 19 in Concession 4. By the 1850’s, they had expanded their holdings on to lot 19 in the Fifth Concession. John Walter went to school at the Public School on Water Street in Oxford Mills, and then at the Kemptville Grammar School, which was located in the house that still stands at 205 Clothier Street West. The increase in land ownership and the fact that John Walter was sent to Grammar School, indicates that the Harris family had prospered since arriving in Oxford-on-Rideau Township.

John Walter was a good student of Mathematics, for he graduated from the Grammar School and spent time in Toronto studying Civil Engineering and Mathematics. He apprenticed as a Surveyor with his uncle, Francis Jones, in Kemptville. Jones was the Member of the Legislature for the riding, and had built up a successful business as a surveyor and property owner.

When he completed his studies and secured his commission as a Surveyor in 1866, John began working, possibly with his uncle, but, after a few years, and for unknown reasons, he went to the United States in 1869, where he spent two years in Iowa teaching school. He qualified with a first class teaching certificate, and spent the next two years teaching in Iowa and Illinois, where he developed a system of contracted and abbreviated methods in arithmetic, popularly known as “Lightning Calculation”, and demonstrated it at schools and teachers’ institutes and conventions in Illinois and Iowa. He became known as the “Lightning Calculator.”

But, once again, John’s life took a sudden change of direction. In the 1871 Census, he is listed as living back with his widowed mother, sister and grandmother, on the farm in Oxford. There he was listed as a Surveyor. But he didn’t stay long, apparently, because in 1871 and 1872, he was an investor in a lumber operation at Batchewana Bay on Lake Superior. Logging was to become a major industry around the north shore of Lake Superior from the mid-1870’s and throughout the rest of that century, but by then, John Walter Harris had moved yet again.

This time, he moved west, to Manitoba, where, in July, 1873, he began work as a Dominion Land Surveyor, working for the federal government, laying out Indian Reserves under the recently-signed Treaties 1 and 2. He laid out the towns of Emerson and Selkirk, Manitoba, as well as settlement areas along the Red and Assiniboine Rivers.

Harris had arrived in Manitoba at a time of great change and disruption. The settlement at Fort Garry would be the new city of Winnipeg. This was to be the scene of John Walter Harris’ work for the rest of his life. In 1879, he left the federal government service and went into private practice as a surveyor. He was also named the first Assessor of Winnipeg, and was appointed the city surveyor in 1882. From 1890 to 1894, he conducted the first major survey of the city, establishing its streets and boundaries.

Harris was a founding member and President of the Association of Manitoba Land Surveyors.

He also carried on his surveying business, and was involved in a large number of other entrepreneurial projects, which left him, as they say, comfortably well-off, if not exactly wealthy. His leisure time, such as it was, was equally busy and productive. He planned many racecourses, laid out the Winnipeg Industrial Exhibition grounds, and often was a timer, judge, or referee at horse-racing, track, and other sporting events. His most passionate sporting involvement, however, was in baseball. He not only organised a local amateur league, he helped establish the Winnipeg Maroons, a professional baseball team in the city.

In 1883, he was named a Justice of the Peace. He remained the Assessor for the City of Winnipeg for more than 33 years, retiring in 1916. But he did not stop working even then. In 1919, he published his mathematical system as “The art of rapid computation and simplification of the science of numbers”. As part of his pension arrangements with the City of Winnipeg, he remained on the Board of Valuation and Revision into the 1920s.

John Walter Harris never forgot his home. The gravestones of both his sister, Anna, who died in 1861, and his mentor Uncle Francis Jones, in St. James Cemetery in Kemptville, were, as they note: “Erected by J. W. Harris, DLS, Winnipeg”.

He was married twice. He met his first wife, Susan Elizabeth Smith, during his time in Iowa, and they married in 1876. They had two children, but neither survived infancy, and Susan died in 1918. John Walter married again in 1921, to Annie Jane Millions, a widow. There were no children of this marriage. John Walter Harris died in Winnipeg in 1926, far from the rural farm on Bedell Road.