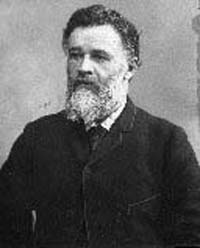 North Grenville has produced many amazing characters, but there can be few who measured up to the life of John Fannin. Born in Kemptville in 1837, the son of William, a tailor, and Eliza, John was one of eight children and took on the profession of shoemaker. William and Eliza had immigrated from Ireland and settled down to a new life in Oxford-on-Rideau. The family prospered in Kemptville, and their house on Lydia Street is a clear indication of their later status in the community. It is unclear when the present house was built, but it is most likely that it was between 1835 and 1845, and it from the building still standing beside the family home that father and son carried on their business. William was also on the first Board of Trustees for the Grammar School in Kemptville in 1843. It has been said in some records that John worked for a time as a teacher, but no evidence of that has been found to date, although his sister, Lucinda remained in the family home, never married, and worked as a teacher in the junior room of the public school, where the B&H Grocery is today. Lucinda died in 1918.

It would not have been unusual if John had remained in Kemptville and continued his life as a shoemaker for the rest of his life, but he took a very different path indeed. In 1862, at the age of 35, John caught the lure of the Cariboo Gold Rush and took off for British Columbia. Even then, he did not take the usual route by sea. Instead, he joined a group of 115 men (and one woman) who came to be known as the Overlanders.

Leaving from Queenston, Upper Canada, the party travelled to Fort Garry (now Winnipeg, Manitoba), where they restocked their supplies and began the hazardous crossing of the Rocky Mountains, using the Yellowhead Pass. They had to abandon their carts and carry their supplies in back backs, and it was August before the group finally reached Tête Jaune Cache, hungry, exhausted, and trading what was left of their equipment for food.

The group then split into two, and John’s group took the route down the Thompson River, travelling on rafts. Two men died on that stage of the journey, but they finally reached the Cariboo gold fields at Kamloops in October. The one woman in the party actually gave birth to a baby the day after they arrived in Kamloops. The journey was extremely hard and dangerous, and the trek of the Overlanders of 1862 is marked by Parks Canada as an Event of Historic Significance.

John did not strike it rich, however, although he spent eight years prospecting and hunting around the interior of British Columbia. It seems he had become quite a good hunter and frontiersman, even before leaving Kemptville, and he gained a reputation as a valuable guide for wealthy Americans and Canadians who hired him to accompany them on their trips into the wilderness of B.C. But John moved to New Westminister, where he once again settled down to a career as a shoemaker. His years in the interior had brought out a gift he had for taxidermy, perhaps not that unusual for a shoemaker, and he began to stuff and mount his clients’ kills, as well as his own.

In the middle of all of this, he wrote songs, at least one of which was published, and even put out a humourous newspaper in 1873, though it did not last long. In the same year, he began working on contract as a surveyor for the government and had some close escapes as he battled climate and geography to survey and report on the Fraser and Stikine Rivers. He began to write articles on hunting and fishing for a New York magazine, “Forest and Stream”, and this increased demand for his services as a guide. He became internationally known for his knowledge and writing on the wildlife of British Columbia.

As his reputation grew, he was appointed to various government positions, becoming postmaster for Burrard Inlet (Vancouver) in 1882, and justice of the peace for the New Westminster in 1884. John had travelled a very long way from Lydia Street in Kemptville, yet his major achievement was still ahead of him. In 1886, he was appointed the first curator of the new provincial museum in Victoria, specialising in anthropology and natural history. He helped to found the Natural History Society of British Columbia in 1890, and in 1896 he was sent on an official tour of similar museums in Europe and the United States. John authored an influential book in 1891, “Checklist of British Columbia Birds”, which was republished last year. He remained as Curator of what became the Royal Museum of British Columbia until he retired in 1904. John Fannin died later that same year. He never married. He had come a long way from the young shoemaker in Kemptville, making a name and a career for himself out of sheer talent and industry.