Several years ago, Pat Babin, Chairman of Friends of the North Grenville Public Library, asked Jeff Murray to attend a Friends meeting with him. Jeff said that he would go, but told Pat that he did not want to be on the executive because he was too busy. Of course, by the end of that meeting, Jeff held a position on the executive. He is retiring from Friends of the North Grenville Public Library for personal reasons, after many years of dedicated service. 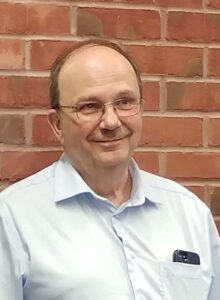 Jeff grew up in Oshawa and attended Trent University in Peterborough, from where he graduated with a degree in Archeology and Science. After graduation, he worked for Parks Canada as their Senior Archeologist responsible for archeological sites in the Prairies District and the Yukon. He obtained his Master‘s Degree in Archeology from the University of Alberta. Jeff was hired as Senior Map Archivist at the National Archives of Canada in Ottawa in 1985. He moved to Chelsea, Quebec, and his wife, Danamae, joined him in 1986. Jeff and Danamae moved to Burritt’s Rapids in 1997.

Jeff is an author, and has published many cartography related articles in magazines and newspapers. He published his first book, entitled TERRA NOSTRA, 1550 – 1950: The Stories Behind Canada’s Maps. He is presently working on his second book about cartography.

Jeff was Vice-Chair of Friends for several years and became Chair in 2018, when Helen Bunn stepped down and moved to Oakville. In addition to his duties as Chair, Jeff updated the Friends’ membership list regularly, sent notices of upcoming events to the members, and prepared the income tax receipts. In 2020, Jeff undertook the responsibility of writing the annual newsletter.

How many people will it take to fill Jeff’s shoes? That is yet to be determined. Jeff will be dearly missed by all of us. Friends of the North Grenville Public Library wish Jeff and Danamae all the best in their retirement. 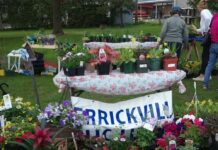 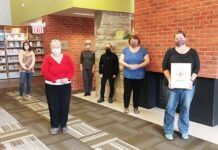 Friends of the Library announce names of award recipients Roberta Russell and Bill McElrea honoured by Friends of the Library