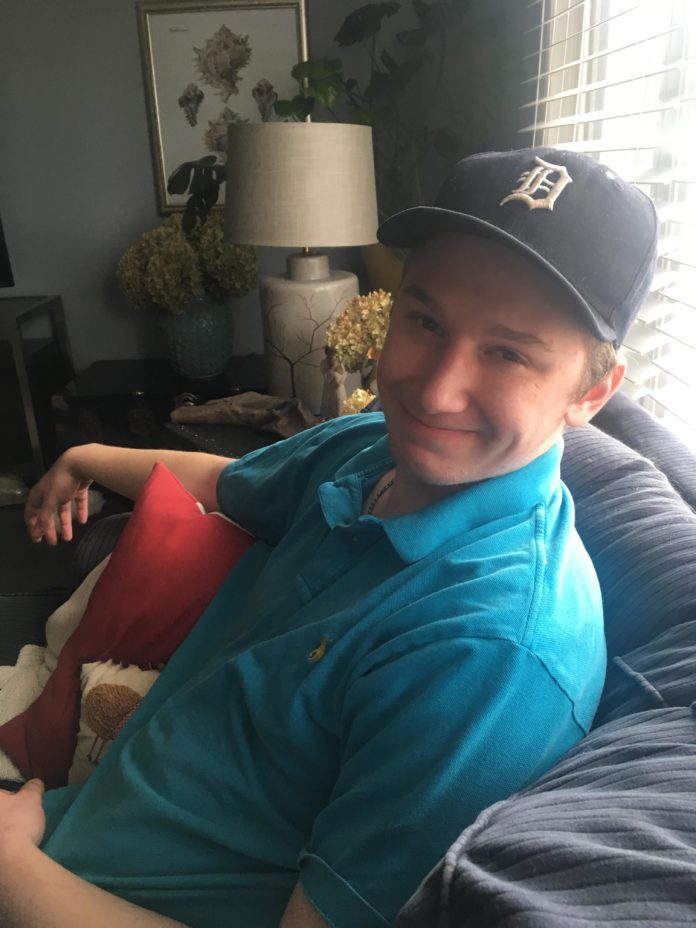 Eighteen-year-old Connor O’Callaghan lay unconscious on the side of Rideau River Road. He had overdosed on cocaine. His body was almost lifeless, except for the thud of his heart that was still beating inside his chest. His friends had dumped him at the side of the road, foaming at the mouth, thinking that he was going to die.

Just a few years earlier, Connor was MVP of his hockey team. He was a model student at Saint Michael Catholic High School and wouldn’t touch alcohol, or even try a cigarette. He was on his way to becoming a decorated athlete. So, what happened? What changed in Connor’s life that lead him to that day, just a few weeks ago, when he was found on the side of a country road, left for dead? It happened in a split second, with a simple blow to the head.

Connor suffered his first concussion in January of 2015, playing basketball for the Saint Michael Catholic High School team. He was a fifteen-year old sports fanatic, often juggling multiple sports at once. After an assessment by a doctor, he was cleared to go back to playing sports, and, while he didn’t return to basketball, he continued to play hockey. Just one-month later, Connor had his second concussion while on the ice.

“I wanted him to stop for a year, to heal after his second concussion,” says his mother, Lyn O’Callaghan. “But everyone was telling me I was just being a paranoid mom.”

Two weeks after the doctors cleared him to go back to hockey, he was hit in the head once again, causing another concussion. “He had three concussions in six weeks,” Lyn says. “Every time you have a concussion, if they are close together, the effects multiply.”

A concussion is a type of traumatic brain injury caused by a bump, blow, or jolt to the head. According to Dr. Kristian Goulet, the medical director at the Children’s Hospital of Eastern Ontario’s (CHEO) concussion clinic, there are between 1.6 to 3.8 million sports related concussions each year in North America. The true number is not known, because approximately 80 per cent of individuals cannot adequately identify a concussion. The classic symptoms of a concussion are headache, confusion, and amnesia, often without a loss of consciousness. Symptoms can be subtle and may not appear until many hours after impact. Multiple concussions can lead to significant long-term impairment, says Dr. Goulet.

By March, 2015, Lyn says they knew something was seriously wrong with Connor. He was having anger issues, anxiety, rage outbursts, problems sleeping, sensitivity to light and noise, and was suffering daily headaches.

While Connor had stopped playing basketball and hockey, his neurologist suggested that he continue to play baseball, which was considered a low-risk sport for head trauma. As an athlete, the neurologist thought it would be worse for him psychologically if he didn’t play some sort of sport. He was playing baseball at a high level, as a fifteen-year old on an eighteen-year-old triple A team based out of Toronto. At batting practice one day, Connor was hit in the head, by accident, with a baseball bat. He had to get over twenty stiches to repair the damage, and suffered his final concussion. This was his fourth one in five months.

After that, things took a nose dive. Connor started self medicating with drugs and alcohol to help deal with the symptoms of what doctors had confirmed was Post Concussion Syndrome (PCS). “His personality change was dramatic and specific,” Lyn says, teary eyed. “He turned inward and became very dark.”

When they saw his neurologist in June, 2015, the doctor told them that the cortisone levels in Connor’s brain were heightened, causing him to be in a state of constant state of “fight or flight”. He couldn’t deal with stimuli like bright lights, school bells, or noisy students in the halls between classes. He couldn’t focus on his work and got into fights in the halls at St. Mike’s. “We soon realized that he needed a lot more accommodation than we had arranged for,” Lyn says, adding that the staff at St. Mike’s were extremely helpful in finding Connor somewhere where he was more likely to succeed. “They knew him as the sports kid, not the trouble kid. We were very lucky that they wanted to help him.”

Connor spent the next year and a half in and out of different specialty school programs in Brockville, Russell and Smiths Falls, all the while struggling academically, with his moods, and substance abuse. In January, 2016, he spent two weeks at CHEO after almost overdosing on drugs. “He kept telling everyone that there was something wrong in his head,” Lyn says, “He wanted it to be fixed.”

Sarah Raymond is no stranger to that feeling of desperation. Knowing that there is something very wrong, but not knowing how to fix it. In 2016, Sarah was a national-level black belt in karate, spending all her free time either at the gym or the karate training centre, Douvris, in Ottawa. “I was training really hard in everything,” she says. “I would go to [the gym] in the morning, and then to the dojo after work for one or two classes.”
It was just a week before the test for the second Dan in karate (the level above black belt), and the energy was high in the room at Douvris. There were a lot of people packed into the room that day, which made Sarah uncomfortable; but she ignored her gut feeling and continued with her practice. “What Sensei says, you do, in karate,” she says.

They were practicing take downs, and when her partner went to take her down, she smacked heads with another practitioner and then hit her head on the floor. “I just started laughing,” she says, adding that she found out later that was a sign of a concussion. “It felt like someone took a brick to my head.”

Over the next few weeks, Sarah struggled with the symptoms of her concussion. Numbness in her arms and legs, disorientation, pressure and throbbing in her head, and being overly emotional and teary. She went to the doctor and was diagnosed with a minor concussion, which she figured would rectify itself over time. Although she didn’t go back to karate, she continued going to the gym, training for dragon boat racing and running.

When things started to get worse, Sarah went back to the doctor who referred her to a physiotherapist who had experience with concussions. She told her to take time off work, stop all vigorous exercise, and focus on resting her brain so it could heal. “I was so upset taking just four days off,” she says. “Every step of the way was a big psychological barrier.” At the three-month mark, Sarah says she got really depressed. “I realized this wasn’t going away anytime soon,” she says. “I was afraid this was going to be the rest of my life.”

Sarah found that she had to create a new identity for herself post-concussion. She couldn’t go back to karate, and work was off the table for the foreseeable future. “My entire identity was taken away,” she says, “My work and karate were everything.”

Sarah found her recovery process hard, not just for her, but for her entire family. “I had no filter towards my husband and family,” she says. “I was very lucky that they were so understanding and supportive.”

With the support of her family, and the help of many specialists, Sarah says she has made a lot of progress. “After two years, I am 90-95 per cent better,” she says. That last five per cent is still a factor in her everyday, limiting her ability to drive and be in front of a screen. She says she will never go back to karate, but has been able to slowly integrate exercise back into her life, which has helped immensely with her recovery. “I see it as a blessing in disguise,” Sarah says. “Now that I am healing, I have learned what is most important in life. It has made me a better, stronger person.”

She wishes she had known more about concussions before it happened. “It’s not just a migraine,” she says. “Even if it is a minor concussion, it doesn’t mean it has a minor affect on your life.”

Connor’s multiple concussions are still having a major impact on his life. Since being hospitalized in 2016, he has been to rehab for drugs and alcohol twice, and has struggled immensely with his mood and the anguish that lives inside his head. Recently, his parents and support network found a program just outside Guelph, Ontario, called Portage, which helps adolescents with addiction. He was scheduled to be admitted for six months of treatment on Thursday, August 9, but, the night before, he got nervous and ran away from home. “We thought, because of his drug history, that he was in dire need and death was imminent,” Lyn says.

Thankfully, through social media, they had many members of the community out looking for him and he was found unconscious along Rideau River Road. It turns out he had met up with his friends to do drugs and, when he overdosed, they got scared and dumped him on the side of the road. “I honestly forgive them,” Lyn says, her voice wobbling and tears in her eyes. “I don’t have any room in my heart or my head for the amount of anger I had.”

After a brief time at Kemptville District Hospital, Lyn and her husband took Connor to a detox centre in Brampton. As of Monday, August 13, he was admitted to Portage in Elora. However, since he is over sixteen, he can discharge himself at any time. “We are hopeful that Connor will be able to reset his brain with intense therapy,” Lyn says. “Hope is all we have left.”

Lyn has been documenting her family’s journey with Connor on Facebook. It started out as a way to let family and friends know about his progress, but turned into an avenue to spread awareness about the impact of concussions and to advocate for people at risk of traumatic brain injury. “Connor has a number of friends who are elite athletes who are addicted to drugs and alcohol, have impulse issues, and have been in trouble with the law,” Lyn says. “So many parents have been contacting me for information.”

Lyn has started a Facebook group called Traumatic Brain Injury Mamas Unite that already has 169 members in less than two weeks. She is also going to talk to a Superintendent at the Catholic School Board of Eastern Ontario about subjecting children to concussions at school. “I want to save lives,” she says. “I want to save kids who are suffering from PCS and who don’t know what it is. We are sharing our story so other parents can recognize what they are going through and advocate for their children’s mental and physical health.”

Concussions affect every person differently, and there is no one treatment that will help everyone to heal. It is a long process that needs patience and the help of many doctors and specialists. Lyn says that if there is one thing that she hopes people take away from her story, it is that it’s not “just a concussion.” It is a traumatic brain injury that, according to Dr. Goulet, affects just as many people annually as breast cancer, multiple sclerosis and traumatic spinal chord injury combined. “So many people said, ‘it’s just a concussion’,” Lyn says. “If we can save one life with our story, then all this will almost be worth it.”