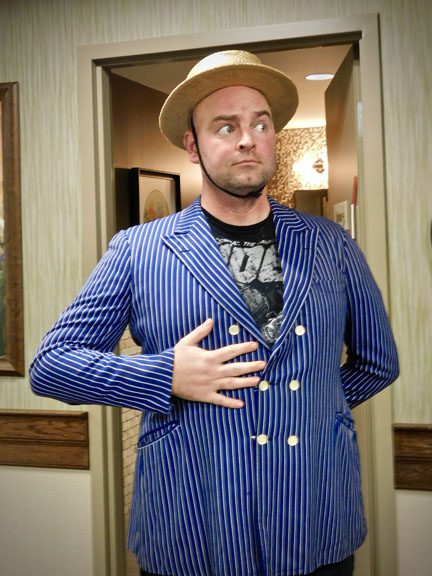 November 3rd this year was the day for us all to “fall back”, turning our clocks – internal and external – back an hour. But in this fall’s comedy performance of The Importance of Being Earnest, ITR Theatre Company is turning back the clock all the way to 1895.

Written by the renowned and controversial playwright Oscar Wilde, the show is subtitled A Trivial Comedy for Serious People. There are many kinds of comedy. ITR has often presented farces, where people enter and exit through the wrong doors at the wrong times, to great hilarity. ITR has also offered touching family comedies that make audiences laugh while simultaneously tugging on their heartstrings. The Importance of Being Earnest falls into a different category: it is a comedy of manners, a comedy of wits and a superb comedy of words.

The importance of language in The Importance of Being Earnest begins with the title, where Earnest is spelled with an “a” while the name Ernest, which figures largely in the play, is spelled without one. Earnest means serious, and the character(s) of Ernest in the play are anything but – and so the puns and wordplay begin. To explore this theme further, you’ll have to come see the show!

ITR first performed The Importance of Being Earnest in 1992, 27 years ago – so reprising it is another way of turning back time. The current production is directed by Steve Wendt, who has directed several shows for ITR’s sister company, the Kemptville Players. It features several ITR veterans as well as first-timers to the ITR stage and one actor, Angelique Iles, who is making her theatre début in this show. Another first-timer is Klaus Beltzner, well-known for his many contributions to the Manotick community, who is turning over a new leaf in a non-speaking but highly entertaining role as the Footman.

The Importance of Being Earnest opens on November 15th at the Osgoode Community Centre and runs there for two consecutive weekends. Friday night performances are at 7:30, with doors and bar opening at 7. Dinner shows are on Saturday evenings: doors and bar open at 5:30, dinner is served at 6 and the show starts when dinner ends. Sunday matinées begin at 2, with doors opening at 1:30 for complimentary tea, coffee and cookies. Tickets are $20 for adults, $16 for seniors and students and $55 for the dinner theatre shows. For more detailed information (including the dinner menu) and to purchase tickets, please go to itrthreatre.com or call 613-800-1165.