Yes, hard as it is to imagine, it is a full fifty years since the legendary Woodstock festival spontaneously erupted on Max Yasgur’s farm in White Lake, New York. Between August 15 and 18, 1969, around 400,000 people sat through mud and rain to watch some incredible music being performed by the biggest names in popular music at the time (except, of course, for the biggest: the Beatles, Dylan). The Rolling Stones had their own music event later that year at the Altamont Speedway Free Festival. But more of that later.

The fascinating thing is that Woodstock and Altamont were only two of the great music festivals to be held that year. A few weeks after Woodstock came the Isle of Wight Festival in England, which attracted an audience of approximately 150,000 to watch 26 performers including Bob Dylan, The Who, Tom Paxton (who nearly stole the show), Joe Cocker, The Moody Blues and Free. And even before Woodstock, in July, there was the Atlanta International Pop Festival, where about 100,000 saw Janis Joplin, Blood, Sweat & Tears, Canned Heat, Joe Cocker, Creedence Clearwater Revival, and Led Zeppelin.

Canada got into the act too the next month, when, in September, the Toronto Rock and Roll Revival gathered around 20,000 to watch acts like Chicago, Alice Cooper, Chuck Berry, Jerry Lee Lewis, Gene Vincent, Little Richard, and John Lennon, Yoko Ono and The Plastic Ono Band at Varsity Stadium. What a year for music fans. Talk about Classic Rock!

Of course, 1969 had a few other highlights as well. Landing on the Moon probably counts as one! I remember so distinctly watching it in a house in the West of Ireland. That remote and wild location made quite a context in which to see such a technologically advanced achievement. Other technological advances unveiled in 1969 were the first test flight of the Concorde supersonic passenger jet, and the truly “jumbo” Boeing 747.

It wasn’t all positive vibes, of course. 1969 also saw the Manson murders and the ongoing protests against the Vietnam War, which were becoming increasingly dangerous and would culminate the following year with the murders of four students at Kent State University by Ohio National Guardsmen.

That was the thing about 1969, and the rest of that decade, it comes to that: music was at the core of everything. It was literally the soundtrack to everything that happened. The music spoke for a generation in a way it never had before, and, possibly, never did again. But perhaps that’s just the opinion of one of them.

Yes, the year also saw the unveiling of PBS in the States, a major contribution to education, information and freedom of speech at a time when it seemed all of that would be clamped down on by governments around the world. It also saw the arrival of the Montreal Expos, for their brief but colourful time in Major League Baseball. But, after the nightmares of 1968, which saw the murders of Bobby Kennedy and Martin Luther King Jr., as well as the Soviet invasion of Czechoslovakia and the Tet Offensive in Vietnam, which underlined how far the Americans were from ending that conflict.

But, as Al Stewart has sung: “Music was the scene for me. Jimi Hendrix played loud and free.

Sergeant Pepper was real to me. Songs and poems were all you needed. Which way did the sixties go?” [Post World War II Blues]. But what a mixed-up year it was. In January, the Beatles played in public for the last time, on the rooftop of Apple, with Billy Preston adding that fantastic organ part to “Get Back”. Then the police arrived. And, after all those festivals during the Summer, came the dark December of Altamont, when the Stones showed their Sympathy for the Devil.

It may be significant that an attempt to revive Woodstock on its 50th anniversary failed. The original was never meant to be a free festival, it’s just so many people showed up, they had to let them in. Woodstock 2019 was always a business venture, and the spirit of the 60’s is no longer applicable, it seems. Fair enough. Many thought the original marked the beginning of a new era, an Age of Aquarius. Instead, with Altamont and Manson just down the road, it was not so much, to misquote Churchill, the end of the beginning. Rather, it was the beginning of the end. Except for the music…. 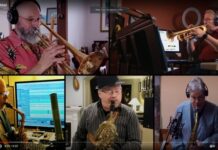 Light in a dark world

Thank you for the music