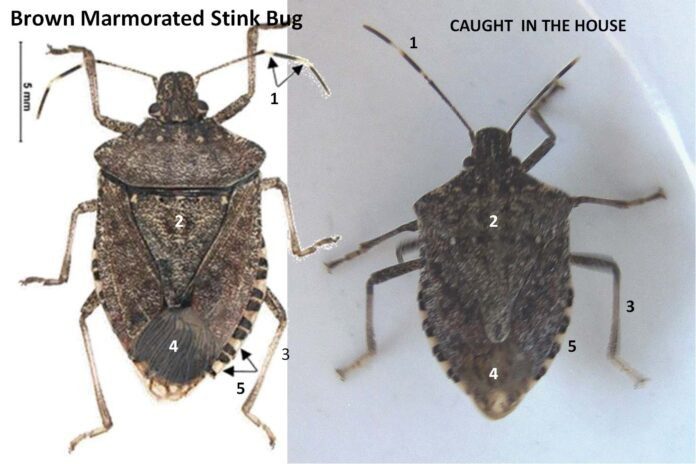 We have a new pest. Brown Marmorated Stink Bug (Halyomorpha halys) is an excellent hitchhiker and extremely invasive. It made its way to Canada from China in shipping containers. It was first found in Hamilton, Ontario in 2010. This insect has made it across the North American Continent in wood, packing material, cargo and on trucks. It may have come into my house on firewood. It is a nuisance in homes as it aggregates in warm rooms. This Asian bug has been spreading around the world since 2015 and is now abundant in British Columbia, particularly in Chilliwack, Abbotsford and Kelowna BC. The BC Ministry of Agriculture is asking the public’s help to report if they find one.

The Australian border guards are on the alert in trying to prevent this nuisance bug entering their country. They hired sniffing dogs able to sniff out the bugs in the containers when they arrive.

The Brown Marmorated Stink Bug is an insect that sucks the juices out of every garden fruit it can find in the garden. It loves to live inside the homes during the winter months as I just discovered this afternoon. It loves to crawl up walls and window panes. Try to kill it with a flyswatter it will release a terrible odour, that’s why it is called “stink bug”.

How to identify the Brown Marmorated Stink Bug (BMSB):