The Blockhouse held their “Merrickville-Wolford Threads of Life” exhibit last week in honour of Merrickville’s 225 birthday. The exhibit was the brainchild of the Merrickville and District Historical Society’s intern, Elizabeth Robinson, who had the idea while attending a historical conference. “I told [President of the Historical Society] Ann Martin, and she let me run with it,” she says.

The exhibit, which took up most of the first floor of the Blockhouse, involved a timeline of some of the notable people and events of Merrickville-Wolford’s history. Each historical figure had their own thread (piece of yarn) that was hung from a timeline near the ceiling, with paper markers of some of their life’s significant milestones. The threads were of varying lengths, with one foot representing every decade of the person’s life. One of the longest threads was for local genealogist Alice Hughes, who lived until she was 92. “Her work is at the Merrickville Public Library and was very helpful in the creation of this exhibit,” Elizabeth said. The shortest strings were the ones representing the young men who fought and died in the two World Wars and the Vietnam War.

The timeline begins in 1793, with the birth of Roger Stevens, one of the first European settlers in the area. It also includes the birth date of his cousin, William Merrick, Sergeant John Johnston, who was the lockmaster from 1832-1855, Thomas Watchorn, one of the owners of the Merrickville Woolen Factory, and Harry McLean, Merrickville’s eccentric millionaire. “We wanted to showcase the people who have made Merrickville-Wolford what it is today,” Elizabeth said.

The exhibit ran from Wednesday to Sunday last week, and Elizabeth and the other summer employees at the Blockhouse encouraged visitors and locals alike to add their own thread to the timeline. Mayor David Nash and his wife, Linda, visited the exhibit last Wednesday and added their threads to the exhibit. It was hoped that, by the end of its run, the timeline would have threads representing many lives, all of which played a role in making Merrickville-Wolford what it is today. “It is what it is today because of the people who lived [and live] here,” Elizabeth said.

At the end of the exhibit all the threads where taken down and given to local artisan Cathy Ivory to be woven into a rug. The rug will be displayed in the Blockhouse as a permanent installation, symbolizing all the lives lived, both past and present, that have had an impact on Merrickville-Wolford. A great keepsake for Merrickville 225. 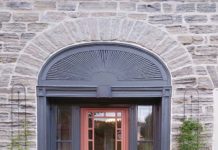 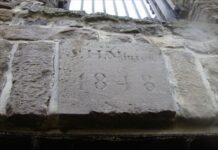