Hwy 43 Car Club closed out their 14th season of Kemptville Cruise Night by teaming up with the Kemptville Cancer Support Group. Rod Rafter, President of the Club, presented Bob Cameron of the support group with a cheque for $1,000 for Christine Johnson, who is being treated for stage 3b cervical cancer, as reported in a previous issue of the Times. Christine has three sons, two of which are living with her, and she is no longer able to work; so the financial strain on her household is enormous.

Her EI, which only gave her a small portion of her salary, runs out this week. She has approached the Salvation Army and the pastor of her church, and is waiting for her doctor to sign the form for her application for Ontario Government Assistance.

If anyone out here in our community wishes to help Christine and her family as they go through this struggle they can contribute to GO Fund Me on Facebook: www.gofundme.com/ud8xb7-christine-johnson, or contact Ellen Vibert-Miller, Kemptville Cancer Support Group, at 613-258-7778. Go Fund Me campaigns lose about 8% off the top for administration, so, if you want your entire donation to go to Christine, donations can be made at any CIBC (Transit #596 Account 81-75934). 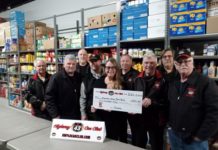