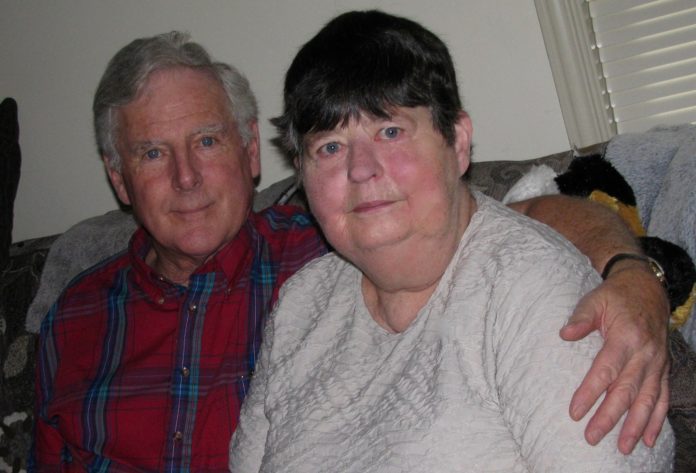 “We’re just a couple of old farts growing old together.” That’s what Ross and Muriel Ayling say, glancing at each other as they sit on their couch in Merrickville. The two have a great sense of humour; they admit it’s a little dark, or even black sometimes, like laughing about growing old, or Muriel falling over a pew in church. Muriel falls a lot, more and more as the years have gone by; through the last 25 years she’s lived with Parkinson’s Disease. Ross is her caregiver.

It took a long time to diagnose, the two say, because a quarter of a century ago doctors didn’t know as much, didn’t talk about the disease. Initially Muriel’s doctor told her “it was in her head,” to which Ross nods his head and grins. “They were right there, but they didn’t know it was Parkinson’s!” Ross picks up her hand and they both laugh.

The two met in 1968 at a church youth group and have been married 48 years. Ross wanted to get married just three short months after meeting Muriel but she said “No way! We have to wait a year and a half.” And so they did. The two raised four girls. The youngest died of brain cancer at 22, a hard time for both of them. They have 15 grandchildren, no ‘greats’ yet.

Muriel’s is a familiar face in town, as she spent over four decades babysitting Merrickville’s children. Ross watches out for her, both in the house, and as she travels around outside with her walker and electric scooter. Just recently, he attached a flag to her scooter, which Muriel insists is too high but it’s Ross’ feeling it’s better to be seen than not.

The walker is something both of them fancy — Muriel because it increases her mobility and independence, and Ross because he gets to put his mechanical mastery to work jury-rigging the apparatus specifically for Muriel’s capabilities. He’s added a “trough” for her arm, he’s modified the seat with an extended backrest using boat parts, and he added a foot lever so Muriel can raise the front wheels if she runs into a sidewalk curb. Ross’ expertise includes tinkering with “boats, motors and some cars” initially at Aylings Marina, a family-owned business started in 1964. It was sold in 1995.

Ross admits, a bit sheepishly, that at last year’s SuperWalk he couldn’t keep up with Muriel and her walker. Besides loving her, “I make sure she gets upstairs and downstairs when we go to bed. Today I made a bit of lunch, I take her to appointments and doctors’ appointments. Yesterday we saw the neurologist… I try and be good,” he adds, eyes twinkling.
“He’s good,” Muriel nods.

There’s still a lot unknown about Parkinson’s. Muriel says her uncle had “bad Parkinson’s”, as well as “two cousins, one on both sides of the family,” so there could be a genetic connec- tion.

The Mayo Clinic describes Parkinson’s as a “progressive nervous system disorder that affects movement. Symptoms start gradually, sometimes with a barely noticeable tremor in just one hand. The disorder also causes stiffness or slowing of movement.

Muriel takes two pills three times a day and “another one for head tremors.”As well as medication, and with Ross at her back, the two have a strong faith community on which they rely. They attend church in Winchester, friends call, there are family get togethers (24 in total), and an exercise class.

As Parkinson’s progresses, Muriel’s symptoms worsen. In a quiet moment she admits “its tough, really tough. I’m frightened. “What’s going to come next,“ she asks.

Parkinson Canada SuperWalk is set for September 7 at Conlon Farm in Perth. Over 80 communities in Canada participate. 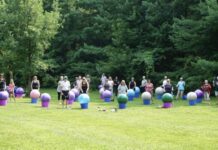 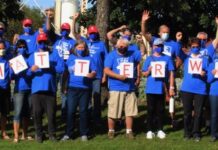 No Parkinson’s SuperWalk but fundraising ongoing