For many people in North Grenville and surrounding area, the name Howard Wilson is associated with the sight of big yellow trucks coming to tow a car out of a ditch, or to boost a car battery on the coldest winter days. Anyone who has settled in the municipality in the past decade or so may be unfamiliar with Howard Wilson, the man himself, and that is a pity. Because there have been few individuals who have played such a prominent part in the social, commercial, and political life of their community over so many years.

The numbers speak for themselves. Howard Wilson Motors, on the corner of Prescott Street and Concession Road, is in its sixtieth year in business. That, in itself, is an achievement. But there is so much more to Howard’s impact. In 2019, Howard was honoured by his fellows in the Independent Order of Odd Fellows in recognition of his 57 years of service to the Order. That is 57 years, another impressive number. Howard served as a volunteer fire fighter with the Kemptville Fire Department for no less than 45 years. Chief John Okum told me that the records of the department show that: “The minutes of the following month, October 6, 1966 read that Howard Wilson was one of four members to be on-call for out of town fires for October. Later, minutes read that Howard provided monthly Engineering Reports and carried the responsibility of Chief Engineer. Howard’s last roll call with the fire service was November 2011”. And everyone will remember the Canada Day and Santa Claus Parades in which Howard took part, driving the antique 1914 fire truck. 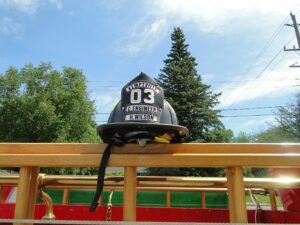 Before amalgamation in 1998, Howard served on the Kemptville Town Council for years. First elected in 1978 as Councillor, Howard was Deputy Reeve from 1980 to 1988, and then served as Reeve from 1989 to 1991. Ralph Raina was on council with Howard during that time, and was Mayor of Kemptville. He remembers Howard:

“During my many years in public office, Howard and I served together for many years. He and I were never afraid of voicing our opinions loudly and vigorously, which made for many interesting council meetings! Howard was a valued member of every council and, being larger than life, we always knew when he was present. I truly value knowing Howard and, as well as the town of Kemptville, appreciate all he did for us.”

Today’s Mayor of North Grenville, Nancy Peckford, joined in the expression of appreciation and condolences, noting that North Grenville’s flags at the Municipal Centre have been lowered to half-mast in Mr. Wilson’s honour.

“On behalf of all residents and business leaders in North Grenville, my Council colleagues and I would like to extend our deepest sympathies to Mr. Wilson’s family.

Mr. Wilson was committed to public service and his community having served on council for 13 years beginning in 1979 as Councillor for the Town of Kemptville, then as Deputy Reeve from 1983 – 1988, and subsequently serving as the Town Reeve from 1989 – 1991. We join in mourning the loss of an individual who, in his dedication and commitment, has helped shape our community over many decades.”

The response to Howard’s death on social media has been wonderful, with many recalling Howard’s kindness and warmth, something he himself often hid behind a gruff exterior. One poster noted: “I always loved coming in to the garage and chatting with him while I waited. He was always so honest about the work he did too”.

Another resident recalled the effect Howard had on her the only time she ever met him:

“Met him only once when I found a stranded family with a blown tire in need of an emergency replacement. We went there first, and he worked so hard to find them one, he even gave a little “let’s see what I have in the back” and proceeded to crawl through two sheds. He was so kind and so sincere in trying to help. What a good man, I will be forever grateful, even for that one moment, to have met him.”

Someone else simply wrote: “Oh my, another Kemptville icon”. A last word, summing up Howard Wilson’s contribution to his community: “An incredible, giving, man who served this community his whole life, with his years on council, his business, and his generosity”.

A private service (due to covid was held this past Monday, and the Fire Department honoured Howard by bringing him through town for a final farewell.

On behalf of Joyce Wilson and family