Much of the goodwill that the Conservative Government of Ontario has won during the course of the Covid-19 pandemic may be somewhat diluted in the coming weeks, as hospital workers, the frontline heroes that Premier Ford and other government ministers have lauded so rightly, prepare to hold protest meetings outside the offices of government ministers across the province.

The “Reopening Ontario (A Flexible Response to COVID-19) Act, 2020″ was passed in July, and, at the time, Premier Ford rejected all the allegations regarding his motives in passing the legislation, calling it “a piece of legislation that is critical, absolutely, to protect the health and well-being of the people of Ontario. This legislation is number one fully transparent, I’m here, a lot of orders have stopped, some we have to continue. One example, is to make sure we have to give flexibility to hospitals, long-term care folks for staff, making sure we keep electricity rates affordable when they are working at home and businesses. When this [COVID-19 developments] is moving rapidly, we can’t wait three weeks, four weeks in some cases, to call back the legislature and move it forward”.

Before it was passed, the proposed legislation had led to protests outside hospitals throughout Ontario, as the very frontline workers that Ford has been so keen to praise for their self-sacrifice were angered that the legislation gives power to the Premier to continue the emergency measures imposed due to Covid-19 for another two years, without having to have it approved by the Legislative Assembly. The Premier can extend emergency orders every 30 days for another two years through sweeping powers that override many aspects of the government’s functions and longstanding legislation.

The Ontario Council of Hospital Unions/CUPE (OCHU) and CUPE Ontario are hosting 22 rallies across the province, asking that the government revoke the COVID-19 emergency orders that can indefinitely override front line workers’ most important workplace rights.

“Frontline staff have sacrificed a great deal to support the people of Ontario during COVID-19,” says Michael Hurley, President of the OCHU/CUPE. “The government has declared the emergency over, yet it has stripped the most important workplace protections from this largely female workforce. For workers revered as heroines, losing the right to keep their shift schedule, to work in the same community, not to have their job eliminated without notice or their parental leaves cancelled is a terrible blow. Many of our members have responsibility for child and elder care and have to be able to plan their lives. The government is disloyal to frontline workers and we trust that the people of Ontario will support us in this struggle to restore our rights.”

It does seem remarkably insensitive to pass such legislation in the middle of a campaign that depends so heavily on healthcare workers to go above and beyond their responsibilities. The President of CUPE Ontario, Fred Hahn, called the legislation “an extraordinary, undemocratic, and unprecedented abuse of power”.

The protest rallies, organised under the title “Restore Our Rights”, are taking place across the province, and Steve Clark’s office in Brockville was visited on August 18, and another nearby protest will take place at the Ottawa office of Lisa MacLeod on September 9. 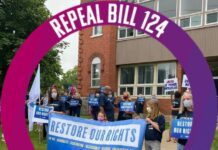