Our staff reporter at Bishop’s Mills sends us the following: Notwithstanding the inclement weather, quite a number attended the Box Social held in the Temperance Hall Friday evening, under the auspices of the I. O. F. Court Pleasant House, No. 904.
Mr. Robert Jones was again called on to perform the duties of auctioneer and fully sustained his reputation for getting the highest prices for beautiful well-filled boxes. The most expensive box sold for $1.50.
Rev. N. McLaren’s Stories of Camp Life and Mr. R. Jones’ impromptu explanation “How It Happened the deer was shot”, brought forth rounds of applause. Mr. J. Sherrard’s recitation entitled Death of Barnaby Rudge received an enthusiastic encore and was responded to by another recitation entitled “Woman’s Rights”.
An amusing tableaux was put on, entitled “Why the butter did not come”.
Brief, witty and complimentary speeches were delivered by N. Greer, A. Ennis and R. McCoy.
The Sherrard-Atkinson Orchestra furnished excellent music at intervals throughout the evening.
Court Pleasant has upwards of fifty members and is one of the most flourishing rural Lodges in the District.

The Literary Follies are clearly following a fine North Grenville tradition! We seem always to have had a deep reservoir of talent in our community.

In 1923, Burritt’s Rapids had its own Baseball Club, and a very active and fun group they were. They elected G. Howard Ferguson as their Honorary President, and the Prime Minister, Arthur Meighan only managed to get in as 3rd Honorable Vice-President. The real competition was for the job of mascot for the team. Two locals entered into the affray with well-planned campaigns, each eager for the job and the “natty new white suit, which the club is furnishing for the mascot”.

In Oxford Mills, William G. Francis had decided to close down his baking business after more than three years in operation. The closure may have had something to do with people not paying their bills, as he inserted a notice in the newspaper on April 23 to the effect that all outstanding debts were to be paid by May 15. “All accounts remaining unpaid after that date will be placed in other hands for collection”.

The hockey team went to Smiths Falls last Wednesday and were defeated 16-0. The boys were in bad shape and as a result were completely shut out by the home team. Mr. Chas. Wilkes acted as referee.

The 73’s can take comfort in the fact that they probably never suffered that kind of defeat at the hands of Smith’s Falls!

Did you know that….

…when Lyman Clothier first set foot in what was to become Kemptville, the entire population of Oxford Township was just fourteen – all one family? The Harris family, from Ireland, were renting land near Burritt’s Rapids.
…when Kemptville separated from Oxford in 1857, there had to be a special Act passed, because Kemptville didn’t have the 1,000 inhabitants required for independence?
…”Squire” Bottum’s home, now 319 Clothier west, was once the only house west of Rideau Street? It was the Squire’s manor house. He owned all the land between Rideau and Pine Hill Road, and between Concession and 43.
…Kemptville remained only a Village for more than hundred years after separating from Oxford? It only became a Town in the 1960’s.
…Kemptville has provided two Provincial Premiers? G. Howard Ferguson was Premier of Ontario, and Alexander Rutherford was the first Premier of Alberta in 1905.
…Clothier Street east was originally called North Main Street?
…the oldest surviving church building in Kemptville is at 116 Clothier Street east? It was built in 1847 as a Baptist church, and it served as such until 1914. It was finally sold in 1927.
…Kemptville had its own movie theatre from as early as 1921? It was located where the Post Office is today, and only closed as a theatre in December, 1959.
…until 1998, Riverside Park was outside of the limits of Kemptville? The Town had to rent, and later buy, the land.
…On 18 September 1837, James Campion, Catholic priest, sold one acre of his property on what is now Clothier Street, to Bishop Alexander McDonell, Trustee for the Roman Catholic Church, “on condition that no corpse be interred on the land”.

Kemptville was busy growing in 1923, and a new development was being planned on Prescott Street, “between the High School grounds and the Hon. Howard Ferguson’s property”.

Victoria Street is today the south end of Reuben and Ottawa Street no longer exists. This area is mostly covered by the United Church and the Public School.

Finally, in terms of entertainment and how to draw in a crowd, no-one could beat the Kemptville Citizens’ Band. After their “regular practise”, they relaxed at 10 o’clock at night with “a hearty repast of oysters, cake, coffee and fruit”.

Mr. J.W. Morrison, the postmaster at Acton’s Corners has lately disposed of his chestnut mare “Topsy”. During the time, JW has driven her 19,593 miles, nearly far enough to encompass the globe. Mr. Spotswood is now the owner of the animal.

Even before the Rideau Canal was completed, the first steamboats arrived in Kemptville in 1830. This opened up a new way to move good and people around, and it was a major factor in the growth of North Grenville. In 1842, Lyman Clothier and Company of Kemptville began operating the Clothier between Bytown and Kemptville in conjunction with a stage line from Kemptville to Prescott. In the colour postcard, dating from around 1905, the Ottawan is steaming away from Kemptville on its way to the Rideau. The Olive is docked at the Clothier wharf, just upriver from the swing bridge on Bridge Street in Kemptville. It was built in Smiths Falls in 1875, originally as a freighter, but later became a popular passenger boat. 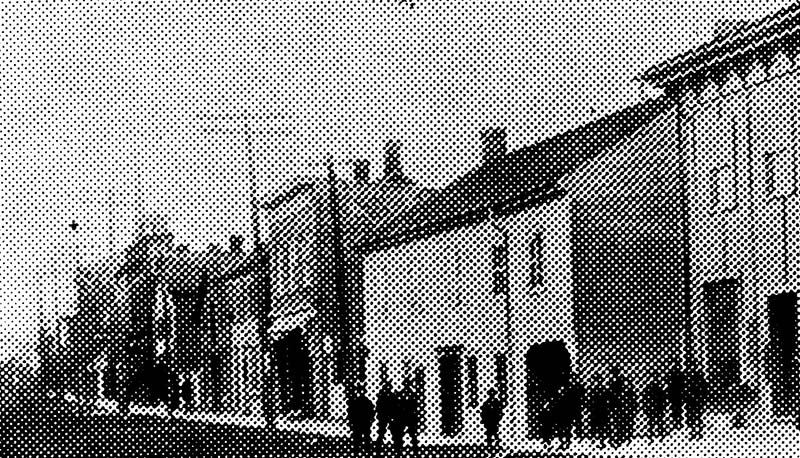 On Friday last a portion of the granolithic sidewalk about eight feet square between the Kerr House and Reynolds & Johnston’s [31 Clothier St east] was violently thrown into the air about four feet accompanied by an explosion. What caused the phenomenon is a question which no one in town seems to be able to answer. One theory is that the great heat of the few days previous caused an expansion sufficiently great to force the top layer upwards.
Whatever may be the explanation of the fact, one thing is certain that a square of very good walk is now in need of repair. As the walk is guaranteed it will doubtless be repaired without any cost to the town.

[1901]
The Kerr House was a hotel on Clothier Street east near the corner with Sanders. It had been a hotel since around 1838. Robert Kerr bought it in 1866 and ran it until 1892. In 1899 his son, Andrew, bought it. As late as the 1930’s, it was a rooming house hotel operated by Dan O’Neill with stables still existing behind the building and a covered passage leading from them to Clothier Street. In the 1950’s, it was bought by the Swedlove family, who added it to their premises next door and ran a furniture store from it. It later became the Canadian Tire Store before that company moved to Highway 43. 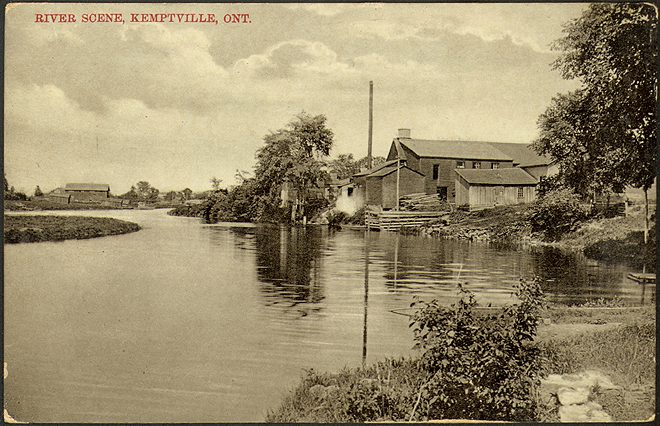 [1910] Notice
The Undersigned having disposed of their Planing Mill and Lumber Business in Kemptville, desire to thank their numerous customers for the kind consideration and liberal patronage extended to them since coming to Kemptville; and they also desire to introduce their successors, The Palmer Lumber Co., who are practical Lumbermen of long experience and who they are assured the public generally will find to be courteous and accommodating, and will be able to supply everything required in the building line. Wishing All a Prosperous and Happy Year.
We remain yours respectfully,
R. D. McMaster
R. E. Millar of the McMaster Lumber Co.
This mill was established in 1895 by Francis Jones, who later was partner with Abram Acton. It was later bought by McMaster. Today, it is the site of the apartment building at 103 Joseph Street.

Entertainment in the Old Days

In 1923, radio was beginning to have an influence on how people spent their leisure hours. But Kemptville had a cinema, and it was a busy place. The Empress Theatre stood where the present Post Office is located on Reuben Street, and the films changed every few days. The poster on the left shows is from the April 19 edition of the Advance. The Irish movie is described as “Begorra, it’s a foine Pitcher”, full of brogue, blarney, Irish wit. But that may even be overshadowed for shiver-inducing effect by the rather innocent description of the following movie, “Singed Wings”, which is “Filled with breathless climaxes and dazzling settings”. Quite.