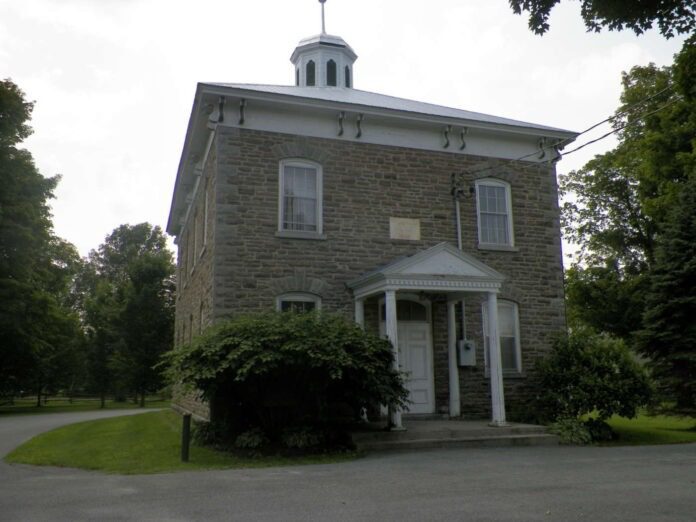 The Kemptville Court House or Old Town Hall and the Former Oxford-on-Rideau Township Hall have been given a reprieve, or at least a bit of breathing space before the Municipality decides how to dispose of them. Last Monday, the Committee-of-the- Whole accepted the report of heritage consultant Marcus Létourneau describing the results of the public consultation on the two buildings held during the summer.

The consultant included a number of recommendations on what should happen next. These were also approved at the committee and will be confirmed at Council.

“The recommendations allow everybody – the Municipal Heritage Advisory Committee (MHAC), the North Grenville Historical Society and the Municipality to explore options, to consult and to arrive at decisions with which we can all be happy,” was the reaction of Rowena Cooper, chair of the MHAC. This is also the view of the NGHS.

Two focus group meetings were held in June, one with the Municipal Heritage Advisory Committee and another with the Historical Society. One public meeting and an online survey from July 11 to August 3 also provided input to the report.

The survey received 156 responses. This exceptionally high participation, according to the consultant, indicates just how much our community cares about these key heritage sites. The response rate later sparked an exchange between the consultant and Deputy Mayor Barb Tobin, who said she was “not impressed” by Marcus Létourneau comparing the survey response in North Grenville to a similarly small number obtained in Mississauga with a much larger population. She said issues like this attracted much more interest in small places, like our community. When asked, the consultant later said, based on his experience, he would have predicted a response rate of 20 or 30 in a place like North Grenville.

The contributors shared many of the same concerns across the board. The majority felt that the buildings should not be demolished (89% for the Court House and 95% for the Township Hall) or sold unconditionally (84% and 96% respectively). Most felt that it would be preferable to continue the leases in place at the Court House or find appropriate tenants who would respect the historic character of the building. The situation at the hall in Oxford Mills, which is also a National Heritage Site, presents greater challenges, but contributors still felt the building should not be sold but might find a community use or be leased with significant restrictions on appropriate uses and what could be changed.

The first recommendation noted that the designation bylaws currently meant to protect the buildings require updating and more research, so that they protect what is actually there and what is valued by the community. This, in part, ties in with the next recommendation—to hire a built heritage architect or engineer to prepare a conservation plan, so we know what the true costs of holding onto these structures will be.

Next, he recommended that the Municipality engage a real estate expert to conduct a market analysis of the two properties to attempt to determine their real economic potential, through finding new uses, while protecting their heritage asset value with new rental arrangements and covenants.

Finding a way to pay for heritage conservation is clearly the key factor in saving the Court House and the Hall. The report gave a number of suggestions of grants for which the Municipality could apply. When asked, 71% said they were not concerned about how much it would cost to preserve the buildings and 68% said they would be willing to help with fundraising.

In his last recommendation, the consultant urged the Municipality to continue to inform and engage the community in the process of finding a future for these buildings. The community has demonstrated its interest, it is now up to the Municipality to keep us in the loop and engage us in finding solutions. You can find the full report on the NG Times web site: ngtimes.ca.

Letter to the Editor – battle for nevermore

Letter to the editor – heritage buildings