“Here comes that feeling that I’d forgotten. How strange these streets feel when you’re alone on them. Each pair of eyes just filled with suggestion. So I lower my head, make a beeline for home. Seething inside.” [Cowboy Junkies, “Sun Comes Up, It’s Tuesday Morning”]

I know it’s not really possible for a man to understand the feel and depth of those lines. The sense of vulnerability mixed with anger and frustration that can overcome someone when they find themselves in that situation. Walking down a street at night, alone, deeply aware of the presence of others, wondering if they will notice you, approach you, hurt you.

And it’s not just the physical assaults that concern you: there’s the psychological assault also. “Each pair of eyes just filled with suggestion”, maybe just a look, a stare, or perhaps a few words thrown in too. Take Back the Night is a genuine aim, a real need for all of us. The statement needs to be made, loudly and clearly, both in the walk itself, and in the defiant declaration that the Anti-Violence Coalition of Leeds & Grenville made afterwards: “Whose streets are these Kemptville??? Our Streets!”

It was wonderful that the first Take Back the Night march in North Grenville has taken place. It is wonderful that so many stood up and walked in solidarity to reclaim the right to walk without fear or intimidation. It is also important that this foundation is built on, and that the whole subject of abuse, violence and intimidation against women is now talked about openly and with consistency. Yes, the Me Too movement has brought the issue to a higher profile, and people generally are more aware of the problem than they may have been before. But that doesn’t mean that everything is ok now. Far from it.

This situation doesn’t start with men on the streets hassling women. It starts with young people seeing various forms of abuse in their home as they grow up. And not just abuse of their mothers or sisters, either. The Anti-Violence Coalition of Leeds & Grenville deals with elder abuse, teen violence and bullying, sexual assaults, and other forms of violence against people. Women are not the only victims of physical abuse, though they are, by far, the most common ones. This is not, therefore, something for which women alone need to campaign: it is for all of us, for the health of our entire community.

It was great to see so many men walking to Take Back the Night, identifying themselves with the struggle of women. I know there are some who think men should stay away from such events, that their presence is unnecessary and unnerving. But I would want those women, especially, who feel that way to understand that we feel a need to be there, to make our own statement of rejection against violence and intimidation of our wives, sisters, daughters and mothers. I have known, as have so many other men, the feelings of unease, almost of guilt, when I walk down a street, or get on an elevator, and find a women the only other person present. I know the sensation when they tighten up, aware of my presence as a potential threat to their well-being. I want to be able to say something, to reassure them that I am no threat, but I can’t. It might be taken as an intrusion, it might be seen as the start of an unwelcome approach.

So it is important that men can also stand up and say they support women, they believe them, they admire their courage, and they want to play a part in changing things for the better, for all of us. Because the answer to women’s fears and anger is not to divide men from women, it is to make everyone comfortable with each other, to make those who cause this fear and anger aware that they are the minority, the unwelcome minority. We want them to know their behaviour and attitudes are not “macho”, not “manly”, not something to boast and be proud of.

All oppression, whether misogyny, racism, bigotry, gender discrimination, or ageism – whatever the nature of the disease, affects us all and needs to be confronted in the most peaceful yet effective ways we know. Whether it is daytime or the early hours of a dark night, whether it is at home, or at work, or in public, whether it is the young, the old, women should be allowed the freedom to be safe, free from fear, free from intimidation, or sexist comments and gestures. They should be free to walk with head raised, eyes clear, confident and unafraid. Take Back the Night involved the OPP, St. John’s Ambulance, women and men of all ages. All walking the streets of our community in confidence and strength. Long may it be so. Take back the streets, take back the right to be free, Take Back the Night. 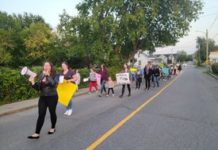 Take back the Night