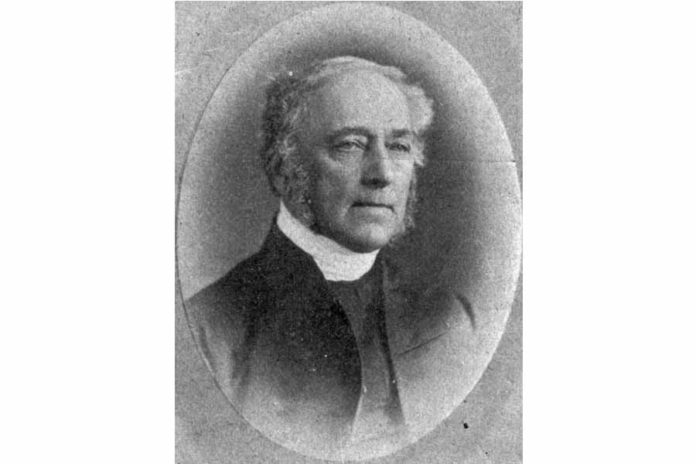 The distinguished older gentleman in the portrait is the Venerable Henry Patton, Archdeacon of the Diocese of Ontario.

In 1826, the Church of England established the pioneer mission parish of St. James in the wilderness between the Ottawa and the St. Lawrence, appointing Henry Patton (1806-1874), a youth of twenty, to the Parish. St. James Parish included the Townships of Wolford, Oxford and South Gower, and, north of the Rideau, the Townships of Marlborough and North Gower.

As the young missionary travelled the Parish, he became aware of the challenges faced by the settlers. Religion was rarely a priority. Life alone was a struggle: building a home, clearing land, raising crops, tending livestock, and feeding and clothing a family was the necessary reality for the pioneers.

There were some families of means in Clothier’s Mill. Squire William H. Bottum had granted to Lyman Clothier Sr., Trueman Hurd and Abraham Beach three-forths of an acre on North Main Street (now Clothier Street West) as the site for a church and burial ground. One hundred and ninety years ago, in early 1827, Henry Patton, with his congregation, began excavating for the stone foundation on which a wood frame church was built. St. James became the first church in the village and in the territory.

Henry Patton was one of the most able of the early missionaries and he achieved much in the Parish. After building the first church in 1827, a second church, Christ Church in Burritt’s Rapids, was erected in 1831, likely using the same plan as St. James). This church has survived and continues to open its doors to worshippers. In 1837, he built the original Holy Trinity in Merrickville. He was a prominent member of the Board of Trustees that established and built the Kemptville Grammar School in 1843. The school was built on a lot offered by Patton.

In 1833, Henry Patton married Harriet Amelia Warner (1813-1844). Along with success came heartbreak, three of the Pattons’ infants, and one toddler, died: Elizabeth in 1834, Andrew in 1836, Toddler William Henry in 1841 and James in 1842. On August 17, 1844, Harriet Amelia Patton died. Harriet and the four children are buried in St. James Cemetery.
It was time to move on. Henry Patton was a widower with an eight year-old son, Alfred, and a five year-old daughter, Elvira, when, in 1845, he was appointed to the Parish of Cornwall. Not yet forty, he had gained a wealth of experience in nineteen years at St. James. He had learned his lessons well; he knew the hardships that faced a travelling missionary in a large, isolated wilderness Parish. He knew the challenges of supporting a family in any degree of comfort while living on a “wretched allowance”, a “miserable pittance”, and being expected to appear a gentleman of birth and education.

In 1846 Henry married Georgiana Dodson and they had four children. His career advanced as Rector of Cornwall, Rural Dean of Johnstown in 1849, and, in 1862, sole Archdeacon of the Diocese of Ontario (which then included what is now the Diocese of Ottawa). Patton was the “eyes” of the Bishop for the huge wedge of Upper Canada from Trenton and Deep River, east to the boundary of Lower Canada. Patton was an honourable and scrupulous man, and an advocate for and, keeper of, the missionary conscience of the Diocese.
On April 30, 1874, Archdeacon Patton died. In Kemptville, at a special Vestry in July, it was agreed to “make an earnest effort to obtain the funds required to erect a neat stone church to the honour of Almighty God and in memory of the late Venerable Archdeacon Patton”.
On August 24, 1874, the Ottawa Free Press reported that John Stannage planned to build a new church “to be called the Archdeacon Patton Memorial Church”. As early as 1873 Stannage had commissioned William Tutin Thomas, one of the foremost architects in the Canadas, to design and construct a “little cathedral” in memory of the first Rector of the Parish.

Stannage and Patton were not only friends of long standing, but also connected by marriage. Elizabeth and John Stannage’s daughter, Anne, was married to Harriet and Henry Patton’s son, Alfred.

On May 28, 1878, the cornerstone for the new church was laid. To the names most associated with the 1880 church, Patton, Stannage and Thomas, two others must be acknowledged. Albert Spencer, Curate for Stannage, the man who guided the Parish during Stannage’s frequent fund raising trips, and Robert White, overseer of works for architect Thomas, who supervised the two year construction project. There are also the now-anonymous craftspeople: stone masons, carpenters, plasterers, blacksmiths, who actually built the church. St. James was constructed at a time when society valued craftsmanship; when chizzled stone, handcrafted door and window frame, oak beam, stained glass, comfortable pew, and memorial furniture were treated and respected as works of art.
Both the handsome exterior of enduring cut limestone, and the simple beauty of the interior, are a tribute to the decades of faithfulness of those who’ve gone before us. As keepers of our past, we reflect on the heritage that is the Archdeacon Patton Memorial Church. Recently, someone asked if there is, among the magnificent stained glass windows, one dedicated to the first Rector of the Parish. There is not, for the St. James Anglican Church itself is the memorial to Henry Patton. 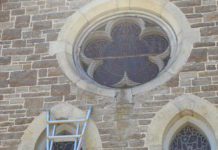 The Windows of St. James