Habitat for Humanity held its Key Ceremony last Sunday afternoon at the Oxford Mills United Church, turning over its Oxford Mills project to Ashley Sloan and her family, who could not have been happier. These projects are the result of a lot of people coming together to donate money, time, material and labour.

Linda Feige from Merrickville is one of those people. She presented the new owners with a custom house number plaque for their front door. It turns out this is not the first time, as she has been donating such signs for some time.

It all started, she said, “when I attended a Restoration and Design conference in Boston. At lunch, I sat next to two bankers turned construction workers who were working on a multi-unit Habitat project in downtown Boston, and former President Carter was on the job. The enthusiasm of these two was so infectious, that I offered to supply them with cast house signs for the entire project.”

Shortly thereafter, she volunteered to supply Habitat in Canada with house numbers as well. First, however, she took the idea into her Village Metalsmiths studio in Merrickville to design an appropriate style, layout and colour look. “I seldom see the completed houses, or the location, and I wanted a sign that would fit in and not be out of character. I also wanted it to convey a warm and friendly front door greeting.”

“Each sign”, Linda says, “is sand cast, and has a given shape; but there are some variations. All Ontario locations are topped with a cluster of hand painted trilliums. The ones that went to Boston had a spray of fall coloured maple leaves.”

The special design, however, is no longer special. It has proven to be so popular, that it is now offered as part of the studio’s regular line.

“I know that every sign is a great hit and I am very pleased about that. It is generally presented at the end of the Key Ceremony. And it seems to be a kind of symbolic finishing touch that reaches people on a number of levels. In reality, it is probably one of the smaller contributions to any project. It is the suppliers of cement, lumber, drywall, and the labourers who deserve the lion’s share of any credit”, Linda said.

So, will she continue this tradition of sign donation to Habitat? “Certainly”, she was quick to reply, “and I would encourage everyone to pitch in and support the Habitat concept. Who would not want a family to have a home?” 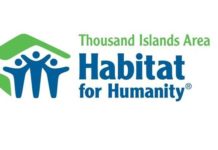 A path to the future 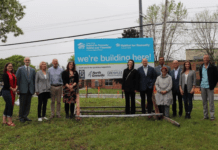