February 2 marks Groundhog Day, a North American tradition dating back to 1888. The groundhog, also called the woodchuck, is the largest member of the squirrel family and one of four marmot species that live in Canada. Rather than just focusing on groundhogs this year, here are some fascinating facts about these rodents and some of their close relatives:

Groundhog: The groundhog is the most widespread marmot and can be found from Nova Scotia to Yukon. Despite their name, groundhogs don’t just restrict themselves to the ground; they can also climb trees and swim. Nicknamed whistle-pigs, groundhogs make peculiar noises, including a loud whistle when alarmed, a squeal when fighting or hurt, tooth grinding when cornered and barking. Some of the Nature Conservancy of Canada’s (NCC’s) properties provide habitat for groundhogs, including Happy Valley Forest in Ontario.

Eastern chipmunk: Like many other squirrel family members, eastern chipmunks make various alarm and defensive calls, such as low chucks and repeated high-pitched chirps, trills and chatters. Some research suggests that this species may use different calls for different predators.

American red squirrel: American red squirrels can be found in every province and territory, and have been sighted on some of NCC’s properties, including Happy Valley Forest in Ontario. They gather between 2,000 and 4,000 pine cones and store them in middens (piles), which may be used by multiple generations. Believe it or not, these small squirrels sometimes eat young birds, mice and rabbits. Some have even been observed biting into maple trees to get at the sap inside. 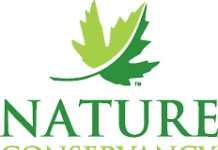