I used to think Luffa Sponges came from the Sea. I had never given them much thought; but, if pressed, I would have said they came from the ocean somewhere. Nope! They grow in the garden, on vines called Luffa Gourds. They’re like pumpkins or cucumbers. Up here in Zone 5 a /b, they’re temperamental brats! Down south, they’re more like marauding weeds! If you’ve got a bit of space, some extra patience, and you feel like being bested by a gourd, you can try growing them yourself.

They are a tropical or temperate vine from the Cucurabitaceae family. That’s the cucumber, squash, pumpkin, zucchini, and melon family. Cucumbers, squash, and luffas are indeed fruits, and were some of the first edible plants ever cultivated. This family of plants has one of the highest number of edible types used as human food. The sponges come from the species Luffa aegyptica and Luffa acutangula. You can eat luffa fruits, like you would zucchini, but they have to be eaten when young. In order to get the sponge, you grow them to full maturity, and let them dry out. The sponge part is the fibrous inside.

They need at least 110 days to reach maturity, although some varieties say 150 to 200 days. When a seed package says “days to maturity”, it means how many days from the time the plant is transplanted into the garden until the first fruit on a plant is ripe. By comparison, most tomatoes are around 85 to 90 days until maturity, and we start them sometime in March. You also need to consider the possibility of a week or more of bad weather, and also that a plant that grows well in the tropics or temperate regions needs sustained sun and heat. By August here the nights can get chilly.

Start the seedlings indoors anytime now. They like heat to germinate, and some people recommend soaking the seeds for a day prior to planting them. This is one plant you don’t want to disturb until you plant it out, so make sure they’re in a big enough container.

Mushroom containers or plastic cups work well, something deep enough and big enough that you can carefully cut the pot away. Peat pots, or newspaper pots can also be used; if they work for you, then by all means, use them. I find that they don’t break down as fast as I need them to, especially when dealing with a temperamental brat of a plant! Whatever you do, be super careful to not disturb the roots when transplanting to the garden. Work lots of well-aged compost into the garden soil before you put the seedlings in. Make sure to harden off your seedlings thoroughly before transplanting!

Keep them well watered, and water them deep. For most plants, you’re better giving them a good drink a couple of times a week, than a little bit of water every day. Deep watering encourages their roots to dig deep, and makes the plants more resilient to drought.

Mulching with straw is a good idea. They need to climb, so give them a very strong trellis. This seems pretty silly, considering the size of the mature fruit, but they will not grow if they’re forced to touch the ground. They won’t die; they will just sit there….waiting. I lost a month of growth the first year I grew them, because I expected them to grow along the ground like pumpkins or squash. Once I gave them a trellis, they took off. By that point, it was too late in the season to expect any fruit, but I did get a few of the pretty yellow flowers, and I learned what not to do! Ideally, you let the luffas get dry on the vines, but pick them before a frost. They will go to mush if left out in the frost. If you do have to pick the fruit before they dry out, you will still have luffa’s, they are just harder to peel.

Also in local gardening news: Gardeners who are missing the Seedy Saturdays and Seed Swaps in person this year, you can join the local gardeners group, “Kemptville Gardeners”, to participate in a Virtual Swap happening February 27 and 28.

Good luck! What are you trying to grow? What would you like to learn more about? [email protected]. 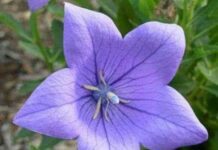 Gardening through the Seasons 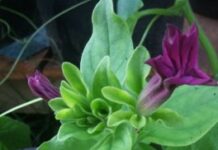 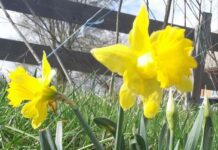