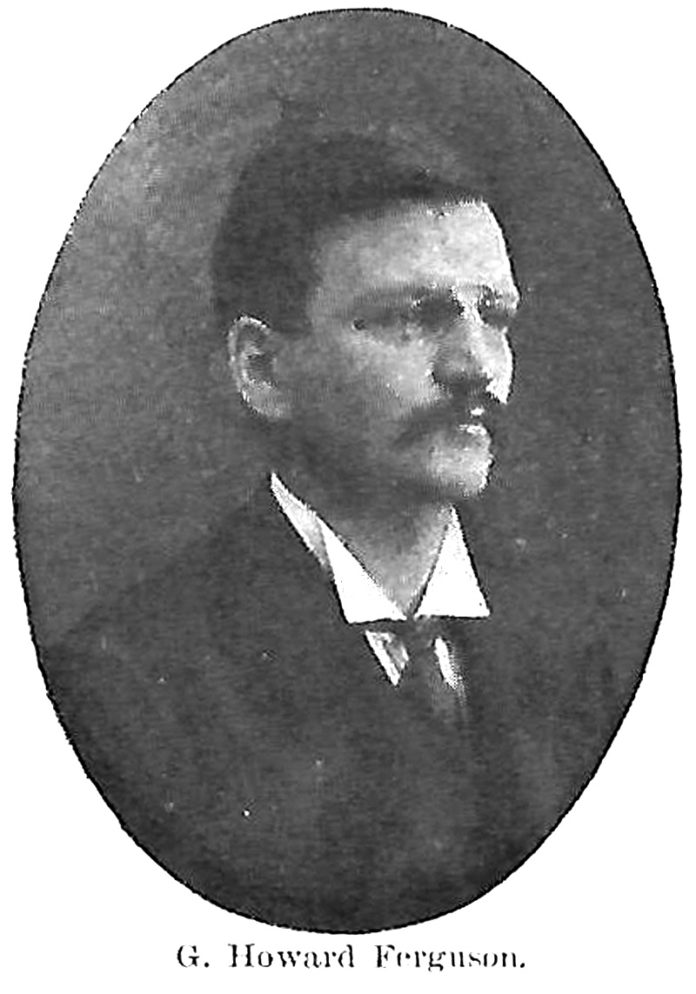 In a series on Sons and Daughters, it is impossible not to notice G. Howard Ferguson. This local boy made good was Ontario’s ninth Premier, and his achievements in that office had a lasting impact on the province. But that is not how his life was expected to work out. Howard was always drawn to the wilder side of life.

His parents, Dr. Charles Ferguson, M.P., and Elizabeth Bell Ferguson, have already been profiled in this series, as was his uncle, Robert Bell. But Howard was to outdo all of his family in terms of having an influence far beyond the borders of North Grenville. Howard was one of seven children born to Charles and Elizabeth, but there was tragedy too. Katie and Robert died when infants, and, when he was about six years old, Howard suffered a very severe attack of measles and lost the sight in one eye almost completely. This resulted in him spending some time living on a farm away from Kemptville, and must have interfered with his schooling. But when he did get a chance at an education, he turned out to be a feisty, combative and mischievous individual, best known for fighting and disruption.

By the age of ten, he was juvenile boxing champion of Oxford Township and Kemptville village. In high school, he did everything from putting gunpowder in the school stove, to unscrewing the tops and seats of the desks in his classroom when a school inspector was due to visit. As the desks collapsed in a chaotic and noisy pile, his teacher did not even ask who was responsible: he simply told Howard to leave the room. Such was his well-earned reputation.

Howard’s high spirits were not always harmless, however. One incident of bullying in high school found Howard badly injuring a new student and ending up in court, where he was fined $8. This, apparently, was the event that convinced him to become a lawyer!

Frequently suspended from school, and with inconsistent grades, Howard carried on his wild activities outside school also. He would attend local auctions and quietly bid against miserly neighbours, driving up the price of an item beyond its worth before dropping out of the bidding and leaving the miser with an overpriced prize. On one occasion, he failed to get out of the bidding war in time, and his father had to pay for the purchase. This did not go down well with Dr. Charles. More tragedy hit the family in 1886, when Howard’s older brother, Charles junior, died of a kidney problem when he was just 19.

As a younger son of the local Member of Parliament at home in Kemptville, Howard was sent to university in Toronto to study law, while the family focus was on his older brother. In his days at the University of Toronto, his room-mate was Stephen Leacock, who would become in the future a famous writer and humourist. Charles and Elizabeth were not happy with this arrangement, feeling that the two young students were too alike not to get into trouble, and they arranged an exchange of roommates for Howard.

This was probably a good idea, as one story claims the young men once found a train engine idling and decided to take it for a drive, which they did. Within a year, Howard and Stephen were sharing a room together again. The two ran the student newspaper and Howard was known as a man who enjoyed a good time with his friends.

This led to a problem when it came to graduating. Howard and Stephen had to get one more credit, but their subject, Mathematics, was not by any means their strongest. Stephen discovered that they could get a credit in Ethnology instead, if they could pass the exam which was taking place the following day. The professor in the subject had written a textbook, so the two students read the book overnight and scrapped through to graduate on schedule.

Having graduated and started a law business in Toronto, yet another family tragedy brought Howard home to Kemptville again. His younger brother, John, who was in his third year studying Medicine at McGill University, was injured playing football and died two weeks later.

Howard returned to Kemptville on the death of his brother, being the only surviving son in the family, to help support his family and practice law. His office was in the upper rooms of the building that now houses the South Branch Bistro. G. Howard Ferguson began his political career when he was elected to the Kemptville Municipal Council, serving three years as Reeve of Kemptville. The wild young man had to grow into a serious young man.