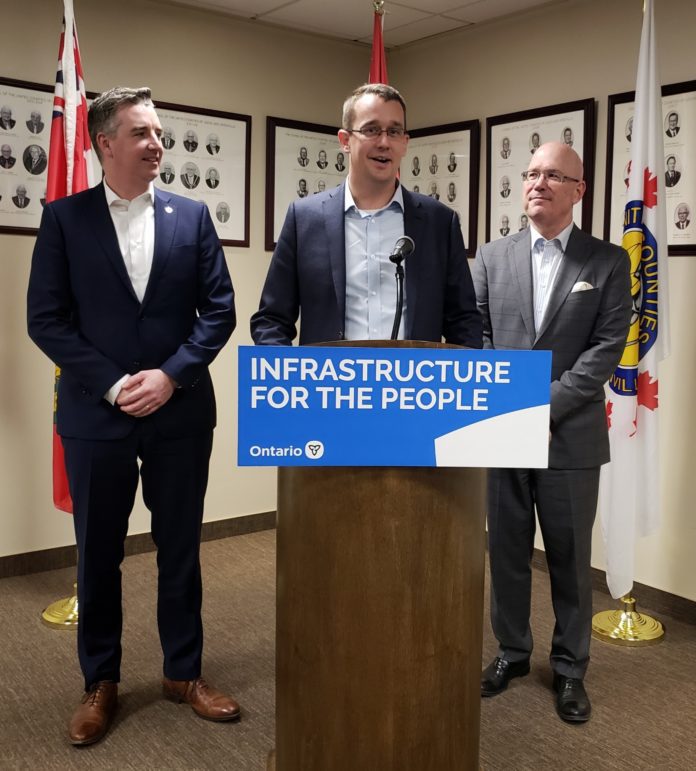 Leeds-Grenville-Thousand Islands and Rideau Lakes MPP, and Minister for Municipal Affairs and Housing, Steve Clark and Ontario’s Minister of Infrastructure Monte McNaughton have announced that the government is taking steps to improve mobile broadband and eliminating cellular dead zones in eastern Ontario through a $71-million investment.

Minister Clark and Minister McNaughton were joined at the announcement by United Counties of Leeds and Grenville Warden Pat Sayeau and officials from the Eastern Ontario Regional Network (EORN). They stated that the investment was going to make people safer, and lead to greater economic growth in the region.

“Our government has committed to help people get the broadband and cellular connections they need. This is a matter of public safety and economic opportunity,” said Minister McNaughton.

About 10% of rural Eastern Ontario has no mobile broadband connection, leading to dropped calls, missed emergency services and a lack of opportunity.

“It is essential that proper infrastructure is in place to support public safety across the province, including Leeds-Grenville-Thousand Islands and Rideau Lakes where cellular coverage is often lacking,” said Steve Clark. “Our government is taking action to improve connectivity so that people can feel confident and safe – at home and on the road. Being connected to the digital world is also a must-have for today’s businesses and for our riding’s ability to attract them.”

“Improving connectivity is key to our region’s economic growth and prosperity and the present lack of this connectivity is inhibiting the development and expansion of many of our local business operations,” said Warden Sayeau. “Thank you, Minister McNaughton and MPP Clark for recognizing what matters most: the fundamental need of improved reliable connectivity in Eastern Ontario and for providing this provincial funding support to the EORN project, which the Eastern Ontario Wardens Caucus has been working on for the past five years.”

The total value of the project is estimated at $213 million. Ontario is hopeful the federal government will commit to funding its share of the project.

“Last week, the federal Liberals said the people of Ontario’s priorities were their priorities,” said Minister McNaughton. “Well, this is a huge priority in Eastern Ontario. It’s about public safety, economic growth and development and convenience. We are investing in people and building our province’s future.”

Cellular connectivity refers to wireless access to voice, text and data services through a mobile device (e.g. a smart phone). The project involves all Eastern Ontario Wardens’ Caucus members and 10 separate municipalities. The goal of the project is to bring cell coverage to 99% of the region where people live, work and travel. Unpopulated areas, including forests, swamps and protected lands are not included in that goal.

EORN was created by the Eastern Ontario Wardens’ Caucus and has already completed a major project to build a high-capacity fibre-optic backbone network in Eastern Ontario.