A new book by American author and blogger, Sean McCaffrey, remembers a man with strong ties to North Grenville and North Dundas. “The New York Rangers Rink of Honor and the Rafters of Madison Square Garden,” was released on September 6 and highlights much of the history of the New York Rangers, including the significant contributions of local, Frank Boucher, who died in 1977 after a career with the NHL.

Frank Boucher was born in 1901 in Ottawa. He dropped out of school at age 13 and worked an office job for the federal government during World War I, before joining the Royal Canadian Mounted Police (RCMP) after the war. Frank had organized RCMP hockey teams during his service, and his professional hockey career began with the Ottawa Senators. Several years later, he was drafted to a brand new team, the New York Rangers, for their first season.

Frank played for the Rangers from its inaugural season in 1926-27 until he retired after the 1937-38 season. During that time, the Rangers won two Stanley Cups. Frank was a forward for the team, and was known to be a gentleman, both on and off the ice. In their first year, the Rangers won the Stanley Cup, and Frank is remembered for an amazing achievement, beginning with that game. An entry on the NHL history website records it like this:

“Perhaps the most ironic event occurs in the third period, when Rangers center Frank Boucher and Montreal’s Merlyn Phillips drop the gloves. It’s the only fight of Boucher’s NHL career; he goes on to win the Lady Byng Trophy as the League’s most gentlemanly player seven times in eight seasons. Lady Byng finally gives him the original trophy to keep and has a second one made.”

Sean’s new book sheds light on the early history of the New York Rangers, including the large contributions of Frank Boucher. Sean is also fighting to have Frank’s #7 jersey raised to the rafters of Madison Square Garden to honour his legacy with the team.

Frank’s granddaughter, Frankie Baird, is a local resident who was asked to provide a foreword for Sean’s book. The Times received a copy of the Foreword to the book, wherein Frankie talks about how, when she was growing up, she had no sense of just how important Frank Boucher was to the Rangers. “Frank was just my grandpa, who showered us with love,” the Foreword reads. Frankie wrote to the Times, revealing that her grandparents moved to the Kemptville and Mountain area in the 1950s, and remained for the rest of their lives.

She spoke with the Times to provide more insights on the kind of man her grandfather was. Locally minded and very kind, Frank purchased a farm near Hallville in the late 1930s, and was a part of the local sports community even during his career with the Rangers. He played a part in having many local hockey players try out for a spot on the Rangers team.

Frankie recalled a story told by local hockey Hall of Fame member, Sammy Gaw. Sam had been playing for the Brockville Magedomas in the 1952-53 season, and asked Frankie’s father, Earl, to ask Frank in jest if the New York Rangers would come and play with the Magedomas in Brockville. To everyone’s surprise, Frank came through a few weeks later and arranged a game, with a packed audience, between the Rangers and the Magedomas, which the Rangers played in their off-days between scheduled matches against the Canadiens in Montreal and the Maple Leafs in Toronto. For Frankie, this really demonstrates what kind of man Frank was, telling the Times, “He was a person who was trying to give a leg up to the local guys.”

Frankie has left a few copies of Sean’s book at Grahame’s Bakery in Kemptville for those who are interested in learning more. The book can also be purchased from Amazon.ca. 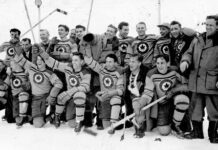 Kemptville had another Frank Boucher